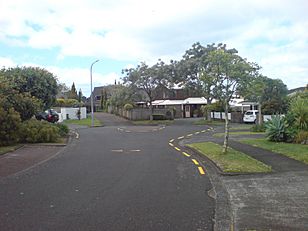 A quiet cul-de-sac away from the main roads which dominate Pakuranga.

Pakuranga is an eastern suburb of Auckland, in northern New Zealand. Pakuranga covers a series of low ridges and previously swampy flats, now drained, that lie between the Pakuranga Creek and Tamaki River, two estuarial arms of the Hauraki Gulf. It is located to the north of Manukau and 15 kilometres southeast of the Auckland CBD.

The suburb's name is Maori for battle of the sunlight or battle of the sun's rays. This peculiar name is the result of a legend about a battle between mythical nocturnal creatures. The battle raged fiercely until a Maori priest caused the sun to rise earlier than expected. Caught by surprise in the rays of the sun, the monsters perished.

Pakuranga itself had a low Maori population in the early days due to the swampy nature of much of the land. Three prominent pa were at Pigeon Mountain and two at Panmure on a cliff, at the intersection of the Tamaki River and the inlet to the Panmure Basin. During the attacks by Ngapuhi in the Musket wars in late September 1820, most of the population were killed, eaten, taken prisoner or fled south to the Waikato.

In early European times, it was a sparsely settled dairy farming area between the townships of Panmure and Howick. In the 1920s and 30s it was served by a bus that ran from Bucklands Beach known as the "shiek". In the 1930s a concrete road was built between these townships that improved transport times for people and milk. Although there had been a hinged steel bridge over the Tamaki River to Panmure from as early as 1866, it was not until the construction of a sturdier structure across the Tamaki River in the 1950s, coinciding with a demand for more settlement land and the increasing levels of car ownership, that Pakuranga became suburban. In fact, for a while in the 70s it was considered the typical New Zealand middle class suburb, 'Vim Valley', after 'a typical Pakuranga housewife' was featured in a famous cleaning product ad.

Many of the American style houses of the 1950s and 1960s are still noticeable but much of the appeal of the early suburb lay in the proximity of untouched countryside. Since the 1970s Pakuranga has been surrounded and engulfed by suburban developments on a much larger scale but of less architectural merit. Traffic travelling to and from these suburbs and the centre of Auckland is largely funnelled through the roadways of Pakuranga which has degraded the area somewhat as well.

Despite this today Pakuranga remains an attractive suburb, with some light industry, centred on the Pakuranga Town Centre 1965, the second built in New Zealand, now known as "The Plaza". The mall the second mall of the modern age in New Zealand, incorporating Farmers and George Court department stores. The mall itself has been transformed several times since it first went up and retains little of the 1960s style it once had. The Te Tuhi Centre for the Arts is located nearby.

All content from Kiddle encyclopedia articles (including the article images and facts) can be freely used under Attribution-ShareAlike license, unless stated otherwise. Cite this article:
Pakuranga Facts for Kids. Kiddle Encyclopedia.