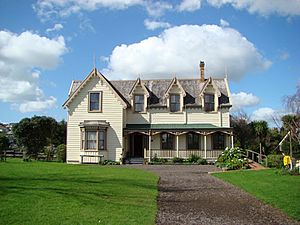 Howick Historical Village is a living museum in Auckland, New Zealand. It is a re-creation of a New Zealand colonial village using surviving buildings from the surrounding area. Despite its name, the Village is actually located in the suburb of Pakuranga.

The Howick Historical Society was originally formed in May 1962 following a public meeting of people interested in local history.

The development of Howick Historical Village began in 1972 when Bell House was offered to the Society. The local council offered five acres of land next to Bell House to be used to form the Village. This was later extended to a total of seven acres.

It took eight years to develop the area into a living museum using volunteer labour. Over this time, a number of historical buildings were offered to the Society which were all relocated to the Village. The work was funded largely from the sale of Christmas cards and from cake stalls.

On 8 March 1980, the Howick Colonial Village was officially opened by Allan Highet, Minister of Internal Affairs, on behalf of Governor-General Sir Keith Holyoake, who was unwell on the day. At this stage, the Village consisted of fourteen buildings.

It was later renamed to become Howick Historical Village, and it was further developed to incorporate more than 30 buildings alongside a pond and historical gardens.

The development and operation of the Village was funded from admission fees, income generated from events and bookings, donations, plus some funding from The Howick Local Board.

The Village is owned and operated by the Howick & Districts Historical Society Incorporated, which is a registered charity.

As an incorporated society, any individual can become a member on payment of an annual subscription. Members elect a board each year at the annual general meeting. The board consists of a president, secretary, treasurer and up to seven members.

The Village is open to the public every day of the year (except Christmas Day, New Year's Day, ANZAC day, and Good Friday) from 10am-4pm. On the third Sunday of each month (excluding December) Live Days are held, when costumed volunteers re-enacted daily life in Victorian New Zealand times.

School groups continue to visit the Museum regularly as part of their LEOTC (Learning Experience Outside The Classroom) studies. Weddings and other private celebrations are regularly held at the village using the Church for ceremonies and the historic Bell House.

Over the years, a number of restoration projects have taken place throughout the Village. These buildings are timber framed and require significant ongoing work to protect and preserve them.

In 2016, a project was commenced to restore Sergeant Ford’s Fencible cottage. This project was started with the support of the New Zealand Lottery Grants Board. During the project, further deterioration of the foundation was found, extending the cost of the project by $30,000 and causing significant financial difficulties for the Village. The Village needed to source additional support in order to prevent stress on the Society's financial reserves, and the project was ultimately rescued with support from the Stevenson Village Trust.

In 2019, the large Pakuranga school house was restored with funding provided by lotteries commission. Significant work by a team of contractors and volunteers completed this vital weather proofing work which included repairs to the windows and weatherboards.

All content from Kiddle encyclopedia articles (including the article images and facts) can be freely used under Attribution-ShareAlike license, unless stated otherwise. Cite this article:
Howick Historical Village Facts for Kids. Kiddle Encyclopedia.