Māngere (frequently written Mangere;) is one of the largest suburbs in Auckland, in northern New Zealand. It is located on mainly flat land on the northeastern shore of the Manukau Harbour, to the northwest of the Manukau City Centre and 15 kilometres south of Auckland city centre. It is the location of Auckland International Airport, which lies close to the harbour's edge to the south of the suburb.

It has four major sub-areas: Māngere Bridge, Māngere Central and Māngere East, with the fourth, Favona in the east, sometimes counted as part of Māngere as well.

The suburb is named after Māngere Mountain, one of Auckland's largest volcanic cones. The title comes from the Māori words 'hau māngere' meaning lazy winds, after the shelter the mountain provides from the prevailing westerly wind. 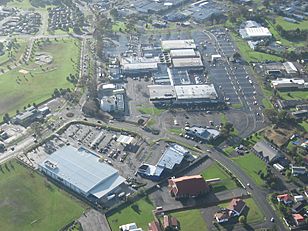 Māngere is often described as a very multicultural area, with Europeans, Māori, Pacific Islanders and Asians living in the area, often with large families. Houses are a mixture of villas and bungalows, often located on former farms or market gardens developed by the state in the 1940s to 1960s.

Māngere's most famous son is David Lange, who was the Member of Parliament for Mangere from 1977 until 1996 and Prime Minister of New Zealand. Another local personality is former heavyweight boxing champion David Tua.

William Sio of the Labour Party has been the member of Parliament for the Māngere electorate since 2008.

Further to the east of Māngere, at Ōtāhuhu, the isthmus of Auckland reaches its narrowest point. To alleviate this transportation bottleneck, the Māngere Bridge was built to accommodate traffic south from the city, especially traffic heading for the airport. Construction work on the bridge was the subject of one of New Zealand's longest-running industrial disputes, from 1978 until 1980. The bridge was finally completed in 1983, linking Māngere with the Auckland suburb of Onehunga to the north. The Southwestern Motorway (State Highway 20), one of the two motorways running south from the isthmus, runs across the bridge and through Māngere.

Suburban passenger trains run on the Southern Line along the eastern edge of Māngere, stopping at Middlemore station. The Māngere station further north at Massey Road closed in 2011.

The Māngere East Hawks rugby league club is based in Māngere.

The Māngere Rovers RFC Rugby Union club is also based in Māngere and competes in the Auckland Premier Competition.

All content from Kiddle encyclopedia articles (including the article images and facts) can be freely used under Attribution-ShareAlike license, unless stated otherwise. Cite this article:
Māngere Facts for Kids. Kiddle Encyclopedia.