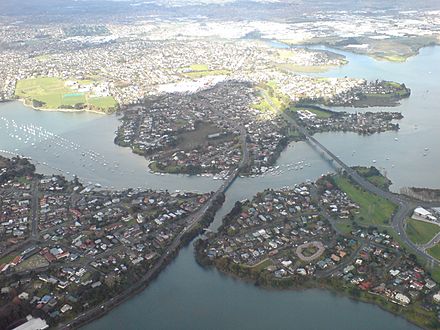 Panmure is a south-eastern suburb of Auckland City, in the North Island of New Zealand. It is located 11 kilometres southeast of the city centre, close to the western banks of the Tāmaki River and the northern shore of the Panmure Basin (or Kaiahiku). To the north lies the suburb of Tāmaki, and to the west is the cone of Maungarei / Mount Wellington.

The Government bought the Kohimaramara block from Ngati Paoa in 1841. In January 1842 Felton Mathew surveyed "Tehmaki" into 37 farms totalling 3,856 acres. Part of this became the Fencible settlement of Panmure, between Maungarei and the Tāmaki River. The Maori name for the area was Tauoma. One of the traditional portages between the Waitemata Harbour and the Manukau Harbour was near here. 4.6 km up the Tāmaki River Maori would beach their waka (canoes) at the end of a small creek (that now passes under the southern motorway) and drag them overland (where Portage Road is now) to the Manukau harbour. During the Musket wars in late September 1821, Mokaia Pa was the scene of severe fighting and was sacked by 4000 musket carrying warriors such as Nga Puhi from the north led by Hongi Hika. The fighting devastated what had been the Ngati Paoa population centre of the Auckland Isthmus during pre-European times which had a population of about 7,000. 3000 men with up to 100 muskets took part in the defence of the Pa but after a close and bitter battle were defeated by the combined northern alliance who had between 500 and 1000 muskets.

Mokaia Pa, on the headland to the east of the Panmure lagoon, was visited in 1820 by the missionary Samuel Marsden. In 1848, 80 Fencible families came here from Ireland and England on the ship Clifton and established a settlement with 99 raupo huts on the eastern shores of the lagoon. They called the area Maggotty Hollow. Located on the Tāmaki River, Panmure was favoured by Felton Mathew to be the new capital of New Zealand. William Hobson, however, decided otherwise, and the new town of Auckland arose further to the west along the shores of the Waitemata Harbour.

Panmure was then instead created as a fencible settlement, where retired soldiers were contracted to defend the settlement in return for land. The soldiers had to give 12 days military service per year and parade on Sunday in full military equipment. The only time they were called to arms was in 1851 when a flotilla of 20 waka took about 350 warriors to Mechanics Bay to attack Auckland. The Panmure fencibles were issued ammunition to defend the Tāmaki River and stop any armed Maori attack. Only the Onehunga fencibles were marched to the hill over looking Mechanics Bay to join a British line regiment.In the 1863 attack on Auckland the government used mainly professional soldiers instead.

Panmure was an important town and port as it was strategically placed near the narrowest part of the isthmus, and during the New Zealand land wars of the 1863 it became a very busy place. Even after the railway reached Auckland in 1908, Panmure somewhat continued as a transport hub — steamers from Auckland en route to the goldfields in the Coromandel and Firth of Thames would call in here. Panmure prospered partly due to being on the route between Auckland and the much larger fencibles settlement of Howick in the 1800s. People and goods used the ferry at the narrow point below Mokoia Pa.

Until about the middle of the 20th century, Panmure remained a prosperous but mostly pastoral setting, the smallest borough of Auckland, and described as "a quarter of a square mile of farmlets surrounding a sleepy village that boasted little more than a church, post office, a handful of shops, and a two-storey hotel that was widely known from horse and buggy days".

It was only with the explosive growth of suburbia around it after World War II, and better bridges to Pakuranga that Panmure relatively suddenly started to grow significantly, and become a commercial centre.

Major recent developments in the area include the opening of Sylvia Park, which is currently New Zealand's largest shopping mall, in the nearby Mount Wellington area.

Work has completed on the Panmure section of a major new Auckland Transport project called AMETI (Auckland-Manukau Eastern Transport Initiative) which aims to improve the connections of eastern Auckland towards the south-east (Manukau City). As part of this the Panmure train station has undergone a major upgrade, increasing capacity and frequency of trains into the city (now a 17min travel time to Britomart station). The new Te Horeta Rd, the last major milestone, opened on 2 November 2015. Other related upgrades included the building of three new bridges, new cycle paths and foot paths.

Stage II of AMETI will see the completion of a new 7 km busway which will link Panmure Train Station with Pakuranga and Botany. This is expected to cut public transport journey times significantly and relieve congestion on roads. The busway is expected to attract 5.5 million passengers a year. The famous Panmure Roundabout will become an intersection, a change that will see new investment in the redevelopment of the land adjacent to and north of the rail station.

The Tāmaki Transformation Programme was announced in early 2012 by NZ Housing Minister Phil Heatley. This will be the country's first urban regeneration programme, and he went on to say that East Auckland was chosen because it was an area with "significant potential". "It is close to the Auckland and Manukau central business districts. It has a young population, a sense of history and community, green spaces and near-coastal location". Following this announcement, the Auckland Council and the New Zealand Government formed the Tāmaki Redevelopment Company to deliver the Tamaki Transformation Programme with the aim of creating a "thriving, attractive, sustainable and self-reliant community through a series of interlinking and complimentary economic, social, urban space and housing projects". Substantial Central and Local Government partnership investment into the Tāmaki Regeneration Programme will see change over the next 25 years aims to improve the overall quality of life to the residents of Tāmaki with an expected doubling of the population in this area. Future focus on housing, education, health and economic development aims to make Panmure and Tāmaki an exciting place to live and work in.

All content from Kiddle encyclopedia articles (including the article images and facts) can be freely used under Attribution-ShareAlike license, unless stated otherwise. Cite this article:
Panmure, New Zealand Facts for Kids. Kiddle Encyclopedia.