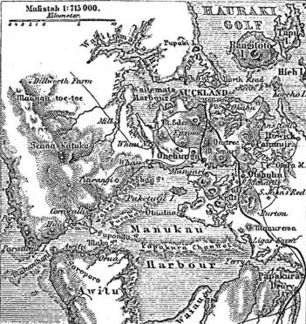 An 1888 German map of Auckland showing Howick on the right edge.

Howick is an eastern suburb of Auckland, New Zealand, forming part of what is sometimes called East Auckland. Due to the relatively numerous remaining heritage buildings and other historical remnants from its early European settlement past, it has been called "perhaps Auckland's most historically conscious place".

The local iwi (Māori tribe) was the Ngai Tai people of Tainui descent. They had lived there for around 300 years with pa (fortified villages) at Ohuia Rangi (Pigeon Mountain), Te Waiarohia (Musick Point) and Tuwakamana (Cockle Bay). 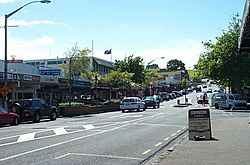 Main Picton Street, with Stockade Hill in the distance.

The Howick, Pakuranga, and Whitford areas were part of the Fairburn claim. William Thomas Fairburn, with his wife and family, established a Church Missionary Society Mission Station at Maraetai in 1836. The local Māori insisted they buy the 40,000 acres (162 km²) between the Tamaki and Wairoa Rivers to prevent attack by the Ngapuhi and Waikato tribes. As an act of Christian peacemaking, Fairburn reluctantly bought the land with his life savings.

In 1840, following the Treaty of Waitangi, the Government took 36,000 acres (146 km²) which it used for the Fencible settlements of Otahuhu and Howick and sold most of the remaining land to settlers, as well as paying Māori and returning most of the Wairoa Valley to them. 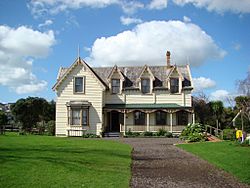 Howick itself is named after Henry George Grey, 3rd Earl Grey as Viscount Howick, who was Secretary for the Colonies in the British Parliament and was responsible for the Royal New Zealand Fencible Corps immigration scheme. The suburb was therefore established in 1847 as a fencible settlement, where soldiers were given land with the implied understanding that in wartime, they would be raised as units to defend it (however, the eventual fighting a decade later used professional soldiers instead). A relatively large amount of the early features from this time have been retained.

The Māori welcomed the Fencibles to Howick and recognised the advantages of co-operation and trade. Māori labourers built the Fencibles cottages under Royal Engineers supervision, although it was noted that initially, the Europeans had to live in raupo huts, having been falsely promised that houses would already been available for them and their families. There were about 250 Fencibles in Howick. Local Maori had been taught to read and write by the Fairburn LMS missionaries at Maraetai. The Fencibles and their families were poor with no capital apart from a small number of officers. About half were Catholic and half Protestant. Quite a few of the adults were illiterate. 101 Howick fencibles served with their sons in the 1860s Land Wars.

Howick's links to Auckland’s pioneering and Fencible past has influenced its development and is also evident in the names of many streets. Others are significantly named for British military heroes or battles. Bleakhouse (as in Bleakhouse Rd) was the name given to a Fencible officer’s house built in Bleakhouse Rd for Surgeon-Captain John Bacot who became a magistrate in Howick. Later, in the hands of the Macleans family it became the heart of the social scene in the 1850s/60s. The house was burnt down in 1910 but gave its name to the street.

Other roads such as Bacot, Bell, Fencible Drive, Montressor Place and Sale Street, plus many others, also have Fencible connexions, e.g. Sir Robert Sale was one of the ships which brought the Fencibles to Auckland in the 19th century. Montressor Place was named for Captain Charles Henry Montressor-Smith who arrived in Howick with the First Battalion of Fencibles in 1847. He later moved to a property in neighbouring Pakuranga, where his house, known as Bell House, still stands at the end of Bell Rd next to the Howick Historical Village. 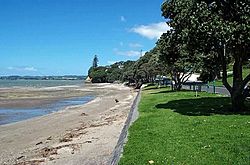 Moore St was named after General Sir John Moore, a British military hero, who lived from 1761-1809. General Moore fought against Napoleon alongside Sir David Baird for whom Baird St was named and he (Moore) died at Corunna during the Peninsular War whilst serving under the Duke of Wellington. At Corunna he was attended by Dr J. Bacot, father of the Howick Fencible doctor, who lived in Bleakhouse. Moore St was part of the original Fencible village and was sub-divided into one acre (4,000 m²) allotments down to Rodney St. People will, no doubt, recognise that Wellington and Nelson Sts spring from the most famous of British war heroes, Lord Nelson and the Duke of Wellington and that Selwyn St takes its name from the first Bishop of New Zealand, George Augustus Selwyn.

Then there are streets such as Granger Road named for John Granger, manager of the brick works, which once stood at Little Bucklands Beach near the rock outcrop where the Bucklands Beach Centre board clubrooms now stands, before moving to Whitford. Litten Rd and John Gill Rd are named after former farmer and landowner families. An Irishman, John Gill, settled in Howick in the 1850s, and his family farmed the land that is now Cockle Bay and Shelly Park. Litten Road is the boundary of the one of the old Gill-Litten farms. To the north of Picton Street, the main street of Howick, is Stockade Hill. In 1863 a field work was constructed on what is now called Stockade Hill, for the purpose of defending Auckland from hostile Māoris who might advance overland from the south, or by canoes from the Firth of Thames. The ditches of the stockade can still be seen today. In the centre is a war memorial were services are held each ANZAC Day. The top of Stockade Hill provides uninterrupted views in all directions. 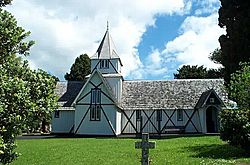 Settlement in Howick centred around the domain, and the village developed as a service centre for the prosperous farming community. Later the centre of Howick shifted to Picton Street which is now the centre. It later became popular as a retirement and seaside holiday location.

In 1865 Howick became a road board district; in 1922 it was created an independent town district; and on 1 February 1952 it was constituted a borough with Elections for Mayor and Council being held on 22 March 1952.

The 1930s saw the construction of a concrete all-weather road running all the way from Howick through Pakuranga to Panmure. This allowed the rapid passage of people and goods to and from Auckland. This concrete road can still be seen, in parts, on the highway between Howick and Pakuranga.

From the late 1940s to the 1970s the Howick area experienced rapid growth, when in 1947, at its centenary, it had still been a town of only 1,500. Up until the 1980s Howick was surrounded on all sides by farmland, but as Auckland grew and new subdivisions were created Howick was consumed by urban sprawl.

In 1990 the re-organisation of local body government in New Zealand saw Howick become a ward within Manukau City, with its Borough Council being replaced by a Community Board and Councillor representation, a move that was unpopular with the inhabitants of Howick, who feared the loss of identity and having to subsidise the poorer areas of Manukau City.

Today Howick is one of the more affluent seaside suburbs of the former Manukau City (now merged with Auckland). It has some of the oldest buildings in the Auckland area, as well as the first parish church in Auckland (All Saints Church).

In July 2008 the community radio station, Howick Village Radio, was established on 88.1 FM and is broadcast over most of the eastern suburb as well as streaming online from their website. They have a variety of shows including some hosted by students from local schools.

From 1993 and prior to the introduction of MMP in 1996, Howick had its own seat in Parliament, Howick; which had been created from part of the former Otara electorate.

In the 1996 general election, due to the need to decrease the number of general electorates in order to ensure a sufficient number of seats were available for list MPs, the population centres formerly in the Howick seat were merged into the former separate seat of Pakuranga.

While making recommendations for the boundaries to apply in the 2008 general election, the Electoral Commission recently proposed to resurrect the Howick seat. The planned seat would have taken in the population centres of Howick and Botany Downs-Dannemora but would have had the effect of splitting Bucklands Beach and Highland Park across two electorates. Due to this, and the planned move to incorporate Panmure, Point England and Glen Innes into the neighbouring Pakuranga seat, the Commission received a significant number of objections from Pakuranga residents. The Commission eventually adopted the recommendation of Objector N17/30 in keeping the Howick suburb in Pakuranga and renaming the new seat Botany, with a corresponding shift in centre of gravity to the new suburb of Flat Bush. [1] [2].

All content from Kiddle encyclopedia articles (including the article images and facts) can be freely used under Attribution-ShareAlike license, unless stated otherwise. Cite this article:
Howick, New Zealand Facts for Kids. Kiddle Encyclopedia.