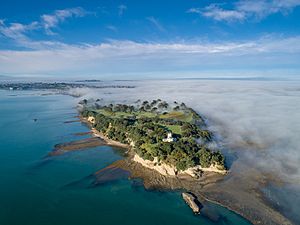 Musick Point from above, emerging from early morning fog 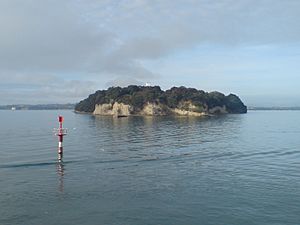 Musick Point from the north. 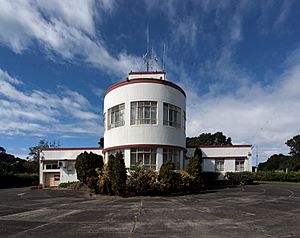 Musick Point is the headland of the peninsula that forms the eastern shore of the Tamaki River in Bucklands Beach, a suburb of Auckland, New Zealand. In 1942 Musick Point was named after Ed Musick, an aviator who visited New Zealand in 1937, although the headland is also known as Te Waiarohia, after an ancient Māori stronghold. Today it is occupied by a golf club and the Musick Memorial Radio Station.

The peninsula itself (known as Te Naupata in Māori) terminates between the Motukorea Channel and the Tamaki Strait in the Waitematā Harbour, Auckland. The residential areas of Bucklands Beach and Eastern Beach lie immediately to the south.

The headland was originally used by Māori of the Ngai Tai iwi (tribe), who dug a ditch across the peninsula as part of Te Waiarohia Pā (sometimes recorded as Te Naupata Pa), until it was overrun by the neighbouring Ngapuhi iwi in 1821. Parts of the ditch are still clearly visible. The beaches and the sea were plentiful sources of food for the local population.

Today it is a favorite spot for walking, wedding photos, sightseeing over the harbour and for recreational fishing, as well as being the site of a golf course.

Musick Point is the site of the Musick Memorial Radio Station, a building in the Streamline Moderne style, which was opened in 1942 to communicate with ships and aircraft. The station was the headquarters of the maritime coast station Auckland Radio ZLD, and of aviation radio ZLF.

The isolation of Musick Point, with its absence of man-made electrical interference, made it an ideal radio receiving site and was a welcome improvement over Auckland Radio's previous location in the Chief Post Office in downtown Auckland, which suffered interference from Auckland's electric tramway. Transmitters for the radio station were established a few kilometres away from Musick Point, in Oliver Road, Bucklands Beach, with remote control by the operators at the Point.

ZLD and ZLF were initially operated by the New Zealand Post Office before the aviation radio service was taken over by the Civil Aviation Corporation, which moved it to Auckland Airport at Mangere. Later, ownership of Auckland Radio changed to Telecom NZ Ltd, and Spark still uses the building for cellular services.

During World War II, a secondary radio bunker was built 300m south of the main building in case the main station was bombed. Because the area was isolated a water tower was built to store water for the small group of houses and the single workers accommodation that was built at the same time as the station, about 500m to the south of the main radio building.

Following the closure of all New Zealand coast radio stations in 1993, the equipment of Auckland Radio ZLD, including most of the Oliver Road transmitters, was acquired by the non-profit Musick Point Radio Group. The Group, which includes several former Musick Point operators and technicians, has a long-term lease on the building, and has reactivated the station on the amateur (ham) radio bands using some of the former ZLD transmitters along with a range of modern equipment. At a 2003 rededication of the building a plaque recognizing the "engineering heritage value" of the station was presented by the Institute of Professional Engineers New Zealand.

In recognition of the station's historical importance, the Group has been issued the amateur radio callsigns ZL1ZLD and ZL1ZLF. The Group maintains a radio museum in the building and operates a low-power FM broadcast station with recorded information about Musick Point. One of MPRG's projects was keeping the traditional marine radiotelegraph frequency of 512 kHz alive, and it had a special licence to operate on this frequency which is outside the normal amateur radio bands. These transmissions ceased in mid 2013 when amateurs were allocated a new 630 metre band (427–479 kHz) and authority to operate on 512 kHz was withdrawn.

All content from Kiddle encyclopedia articles (including the article images and facts) can be freely used under Attribution-ShareAlike license, unless stated otherwise. Cite this article:
Musick Point / Te Naupata Facts for Kids. Kiddle Encyclopedia.