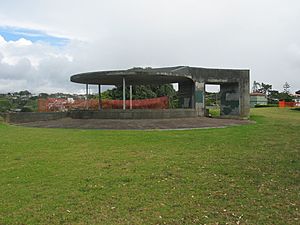 Castor Bay is a bay and suburb of Auckland in the North Island of New Zealand. Located between Milford and Campbells Bay, it is part of the East Coast Bays. To the east lies the islands of Rangitoto and Motutapu, which are easily visible from land. The suburb is in the North Shore ward, one of the thirteen administrative divisions of Auckland Council.

The bay itself is quite small and is well sheltered by an artificial breakwater that extends from the northern edge of the bay, running towards the south. A small bark and grass area with several large pōhutukawa trees offering shelter compliments the beachfront and an extended coastline stretches out to the north towards Campbells Bay.

Nearby John F. Kennedy Park contains old World War II bunkers that were used to survey the Hauraki Gulf and is accessible from Castor Bay by road (Beach Road) or by walkway (from the extended coastline to the north). The northern headland of Castor Bay is the site of an old Maori pā, Rahopara, that is believed to have been last inhabited and then abandoned in the 18th century, prior to European colonisation. Very little is known about the people who lived there but the tribe's ancient earth excavations are still visible.

The local primary school is Campbells Bay Primary School located on Aberdeen Road, nearby the Pupuke Golf Course. It has a decile rating of 10 and a roll of 662. The school opened in 1925.

Sam Hunt, one of New Zealand's most well known poets, was born in Castor Bay.

All content from Kiddle encyclopedia articles (including the article images and facts) can be freely used under Attribution-ShareAlike license, unless stated otherwise. Cite this article:
Castor Bay Facts for Kids. Kiddle Encyclopedia.