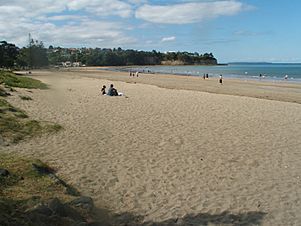 Browns Bay is an Auckland suburb in the East Coast Bays area.

Browns Bay is under the local governance of the Auckland Council, and is located in the North Shore ward of the new Auckland city, one of thirteen administrative areas in the council.

Browns Bay is also the exact Antipode of Benaoján in Spain.

Peter Brown, after whom the bay is named, bought 136 acres of bush and scrub there in 1876. He built his house on what is now the corner of Clyde Road and Anzac Road. This house was destroyed by fire in 1930. He also built a manager's residence in 1886 overlooking his land (now Freyberg Park) at 33 Glencoe Road. This house still exists and is believed to be the oldest existing house in East Coast Bays.

The East Coast Bays Barracudas rugby league club is based in Browns Bay.

The Browns Bay Magazine is run by the local business association.

All content from Kiddle encyclopedia articles (including the article images and facts) can be freely used under Attribution-ShareAlike license, unless stated otherwise. Cite this article:
Browns Bay, New Zealand Facts for Kids. Kiddle Encyclopedia.