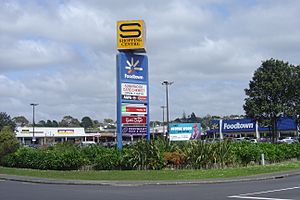 Sunnynook is a suburb of North Shore, one of several cities in the Auckland metropolitan area in northern New Zealand, and is under the governance of Auckland Council.

The suburb is centered on the Sunnynook Shopping Centre and the nearby Sunnynook Park. Sunnynook also has a skateboard bowl located in Sunnynook Park, which is also home to the Glenfield Greyhounds rugby league club. There is also the new Sunnynook bus station.

All content from Kiddle encyclopedia articles (including the article images and facts) can be freely used under Attribution-ShareAlike license, unless stated otherwise. Cite this article:
Sunnynook, New Zealand Facts for Kids. Kiddle Encyclopedia.