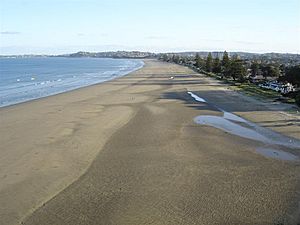 Orewa, a town in New Zealand's North Island, lies on the Hibiscus Coast, just north of the base of the Whangaparaoa Peninsula and 40 kilometres north of central Auckland. Orewa's population was 8,523 in the 2013 Census, an increase of 1,197 from 2006. It is a popular holiday destination. Orewa is also considered one of the fastest growing places in New Zealand and is one of the most expensive areas in which to buy a house.

The northern motorway, part of State Highway 1, passes just inland of Orewa and extends through the twin Johnston Hill tunnels to near Puhoi. Orewa was administered as part of the Rodney District for two decades, until this was subsumed by the broader Auckland Council in October 2010.

Places of note within the town include:

Orewa beach is one of the longest (3km) and safest beaches in Auckland. One of the more notable events on the beach is the Orewa Big Dig. This is an annual event organized by the local Lions Club, where children dig in the sand to find prizes. All monies raised go to local community groups. Orewa Community Centre is located in Orewa Square. The Hibiscus Community Centre is located at 214E Hibiscus Coast Highway.

In 2005 locally famous Puriri Park, at the foot of Eaves Bush, was sold for over $2,000,000. It was being subdivided in a $450 million development to form the community of Kensington Park to provide for the rapidly rising demand for housing in Orewa and the surrounding area. This upset some elderly locals as they regarded the old park as a popular place for people to enjoy their holidays and saw the development as a sign of further development to Orewa. However the developer went into receivership in September 2008 after completing less than 10% of the 750 homes planned.

All content from Kiddle encyclopedia articles (including the article images and facts) can be freely used under Attribution-ShareAlike license, unless stated otherwise. Cite this article:
Orewa Facts for Kids. Kiddle Encyclopedia.