The Mahurangi River is a tidal estuary in northern New Zealand that widens into the Mahurangi Harbour before opening into the outer Hauraki Gulf. The Mahurangi Harbour is accessible by all craft and is a sheltered anchorage in all weathers with many small bays and islands. The river itself is extremely tidal and ranges in depth from below approximately 50 centimetres (20 in) (MLW) at the channel entrance to approximately 150 centimetres (59 in) (MLW) further upstream. At high water the river is accessible by larger craft.

In the past, the river was the main link between the town of Warkworth and the rest of civilisation. The historic Portland Cement Works opened in 1884 beside the river and many scows and steamers used it to export the cement. The cement works was closed down some years ago and the ruins remain on the banks of the river behind what has become a marina.

Warkworth was originally known as Brown's Mill, after the sawmill established by Brown on the banks of the Mahurangi, when the area was just a timber camp. The timber was transported by the river and often consisted of kauri spars, which were commonly exported. Sandstone from NSW was used as ballast and this was dropped at the mouth of the river, where large quantities can still be found. The kauri spars were then loaded for the return trip to Australia. Nationally endangered southern right whales are known to come into the bay to rest or calve. There are two boat yards on the Mahurangi river, the one by the ruins and one further upstream by Warkworth. These yards both offer haulout and hardstand options for both small and large craft. The township of Warkworth at the rivers head has a collection of small cafes, supermarkets, other stores and a post office. There is a moderately large wharf with a floating pontoon by the waters edge, although the river all but dries out here at low tide. The river itself has many small tributary streams which enter at different points along its length. 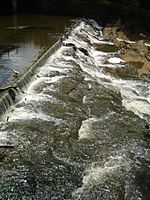 A weir in the river, Warkworth

There are several waterfalls on the river and the navigable portion of the Mahurangi river ends at the lower-most falls near western end of the village. Here the river has been dammed twice and had several bridges installed since the first in the late 1860s. In 1877 a tsunami from the 1877 Iquique earthquake elevated the tide by six feet in mere minutes. There are currently two bridges at this point: a concrete bridge installed in 1971, on which originally operated a tram and which is now a walking bridge, and a more recent bridge with two lanes for traffic.

All content from Kiddle encyclopedia articles (including the article images and facts) can be freely used under Attribution-ShareAlike license, unless stated otherwise. Cite this article:
Mahurangi River Facts for Kids. Kiddle Encyclopedia.