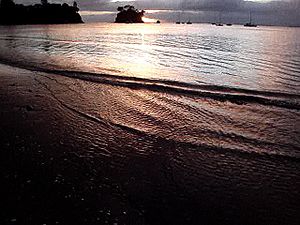 Torbay is an Auckland suburb.

Torbay was under the local governance of the North Shore City Council but was amalgamated into the Auckland "Supercity" in 2010 and is governed by Auckland Council. The name Torbay comes from the area of the same name in the south east of Devon, England.

Attractions in the area include Long Bay Regional Park which attracts over a million visitors each year. There are also a number of smaller public beaches (Waiake, Torbay beach, Winstone's Cove, Ladder Bay), which are highly accessible and utilised both for swimming, and mooring small yachts.

All content from Kiddle encyclopedia articles (including the article images and facts) can be freely used under Attribution-ShareAlike license, unless stated otherwise. Cite this article:
Torbay, New Zealand Facts for Kids. Kiddle Encyclopedia.