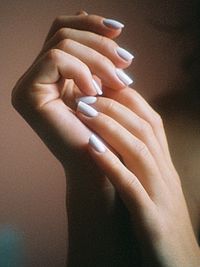 A manicure is something a nail technician does to make someone's nails more beautiful. Manicures can be done at home or by a professional in a nail salon. During a manicure, the nail is filed with a nail file; the free edge of the nail is cut, the cuticle is treated, the person's hand is massaged and nail polish is put on. 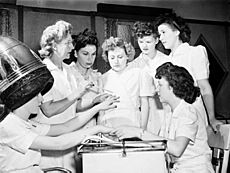 5000 years ago, manicures were first used. Henna was used in India for manicure. The word mehendi, another word for henna, derives from the Sanskrit mehandika. Cixi, the Dowager Empress of China, had very long naturally-grown nails.

All content from Kiddle encyclopedia articles (including the article images and facts) can be freely used under Attribution-ShareAlike license, unless stated otherwise. Cite this article:
Manicure Facts for Kids. Kiddle Encyclopedia.