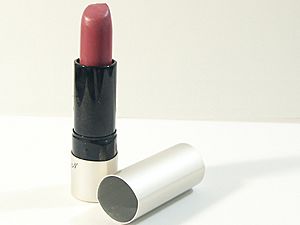 Lipstick is a type of cosmetic used on the lips. It is used to make the lips shiny or to color them. 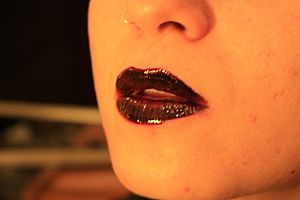 Ancient Sumerian men and women were possibly the first to invent and wear lipstick, about 5,000 years ago. They crushed gemstones and used them to decorate their faces, mainly on the lips and around the eyes. Egyptians like Cleopatra crushed bugs to create a colour of red on their lips. Also, around 3000 BC to 1500 BC, women in the ancient Indus Valley Civilization applied red tinted lipstick to their lips for face decoration. Ancient Egyptians wore lipstick to show social status rather than gender. They extracted the red dye from fucus-algin, 0.01% iodine, and some bromine mannite, but this dye resulted in serious illness. Lipsticks with shimmering effects were initially made using a pearlescent substance found in fish scales.

During the Islamic Golden Age, the notable Andalusian cosmetologist Abu al-Qasim al-Zahrawi (Abulcasis) invented solid lipsticks, which were perfumed sticks rolled and pressed in special molds, and he described them in his Al-Tasrif.

The Chinese made some of the first lipsticks that were made from beeswax over 1,000 years ago to protect the delicate skin of the lips. During the Tang Dynasty (CE 618-907), scented oils were added to them, which gave the mouth an enticing factor.

In Australia, Aboriginal girls would paint their mouths red with ochre for puberty rituals.

Lip colouring started to gain some popularity in 16th-century England. During the time of Queen Elizabeth I bright red lips and a stark white face became fashionable. At that time, lipstick was made from a blend of beeswax and red stains from plants. Only upper class women and male actors wore makeup.

Throughout most of the 19th century, the obvious use of cosmetics was not considered acceptable in Britain for respectable women, and it was associated with marginalized groups such as actors.

In the 1850s, reports were being published warning women of the dangers of using lead in cosmetics applied to the face.

By the end of the 19th century, Guerlain, a French cosmetic company, began to manufacture lipstick. The first commercial lipstick had been invented in 1884, by perfumers in Paris, France. It was covered in silk paper and made from deer tallow, castor oil, and beeswax. Prior to this, lipstick had been created at home. 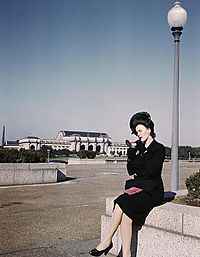 Woman applying lipstick with a compact in Washington D.C., 1943

In the 19th century, lipstick was colored with carmine dye. Carmine dye was extracted from cochineal, scale insects native to Mexico and Central America which live on cactus plants. Cochineal insects produce carminic acid to deter predation by other insects. Carminic acid, which forms 17% to 24% of the weight of the dried insects, can be extracted from the insect's body and eggs. Mixed with aluminum or calcium salts it makes carmine dye (also known as cochineal).

This lipstick did not come in a tube; it was applied with a brush. Carmine dye was expensive and the look of carmine colored lipstick was considered unnatural and theatrical, so lipstick was frowned upon for everyday wear. Only actors and actresses could get away with wearing lipstick. In 1880, few stage actresses wore lipstick in public. The famous actress, Sarah Bernhardt, began wearing lipstick and rouge in public. Before the late 19th century, women only applied makeup at home. Bernhardt often applied carmine dye to her lips in public.

In the early 1890s, carmine was mixed with an oil and wax base. The mixture gave a natural look and it was more acceptable among women. At that time, lipstick was not sold in screw up metal tube; it was sold in paper tubes, tinted papers, or in small pots. The Sears Roebuck catalog first offered rouge for lips and cheeks by the late 1890s. 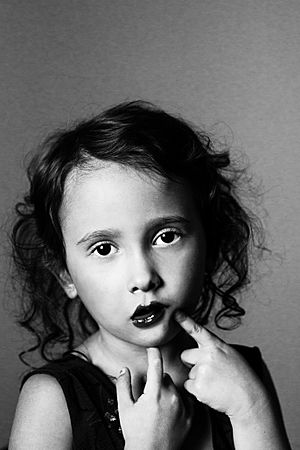 A child with lipstick.

By 1912 fashionable American women had come to consider lipstick acceptable, though an article in the New York Times advised on the need to apply it cautiously.

By 1915, lipstick was sold in cylinder metal containers, which had been invented by Maurice Levy. Women had to slide a tiny lever at the side of the tube with the edge of their fingernail to move the lipstick up to the top of the case, although lipsticks in push-up metal containers had been available in Europe since 1911. In 1923, the first swivel-up tube was patented by James Bruce Mason Jr. in Nashville, Tennessee. As women started to wear lipstick for photographs, photography made lipstick acceptable among women. Elizabeth Arden and Estee Lauder began selling lipstick in their salons.

During the Second World War, metal lipstick tubes were replaced by plastic and paper tubes. Lipstick was scarce during that time because some of the essential ingredients of lipstick, petroleum and castor oil, were unavailable. World War II allowed women to work in engineering and scientific research, and in the late 1940s, Hazel Bishop, an organic chemist in New York and New Jersey, created the first long lasting lipstick, called No-Smear lipstick. With the help of Raymond Specter, an advertiser, Bishop's lipstick business thrived.

Another form of lip color, a wax-free, semi-permanent liquid formula, was invented in the 1990s by the Lip-Ink International company. Other companies have imitated the idea, putting out their own versions of long-lasting "lip stain" or "liquid lip colour." 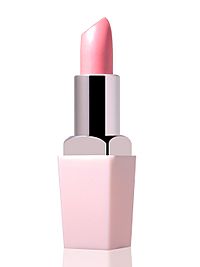 A tube of lipstick

Lipstick contains wax, oils, antioxidants, and emollients. Wax provides the structure to the solid lipstick. Lipsticks may be made from several waxes such as beeswax, ozokerite and candelilla wax. Because of its high melting point, carnauba wax is a key ingredient in terms of strengthening the lipstick. Various oils and fats are used in lipsticks, such as olive oil, mineral oil, cocoa butter, lanolin, and petrolatum.

All content from Kiddle encyclopedia articles (including the article images and facts) can be freely used under Attribution-ShareAlike license, unless stated otherwise. Cite this article:
Lipstick Facts for Kids. Kiddle Encyclopedia.