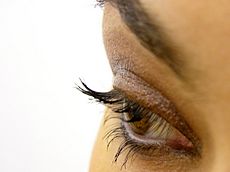 Subtle and effective eye makeup, chosen and blended with her skin and eye colour. An eye pencil or liner on her eyebrows, two shades of eye shadow on the eyelids, dark brown or black mascara on the lashes, eye liner on her bottom lid and corner of upper lid. 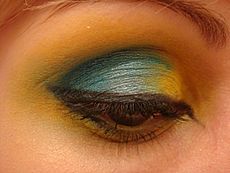 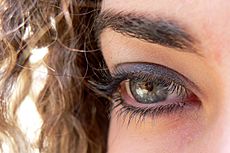 Subtle but brilliant. The grey-silver on the eyelids picks up the slate blue of her eyes. The outer light orange/brown eye shadow links to the eyebrows and hair.

Eye makeup is a type of cosmetics which aims to make the eyes look noticeable and attractive. It is mostly used by females, and by stage performers of all types. Eye makeup is an important part of the fashion and cosmetic industries. The main types of eye makeup are:

The idea can be taken much further. The colour of the eye can be altered by using contact lenses. Glitter and other appliqués can be stuck on near the eye. Fake eyelashes or eyelash extensions are possible. Eyebrow plucking is quite common for brunettes.

Mascara is a cosmetic used to darken, colour, thicken, lengthen, or define eyelashes. Historically, it was (and still is) usually black, but now it also comes in many colours and tints. Mascara comes in three forms: liquid, cake, and cream. It is available in tubes with wand applicators. Ingredients in mascara include water, wax thickeners, film-formers, and preservatives.

A powder eye shadow palette with brown shades for normal day wear; the two center colors are sparkly while the silver and white shades are for creating shadows and highlights.

Eye shadow is a cosmetic that is applied on the eyelids and under the eyebrows. The average distance between eyelashes and eyebrows is twice as big in women as in men. Pale eye shadow visually enlarges this area and has a feminising effect.

Eye shadow can be applied in a variety of ways depending upon the desired look. Typically application is done using sponges, fingers, and/or brushes. The most important aspect of applying eye shadow, and makeup in general, is blending well.

To remove eye shadow, a commercial eye makeup remover may be used, though a face wash will usually remove all traces of colour. Generally it is easy to remove, and simple water and soap can be used. Eye shadow, eyeliner, and mascara may also be removed using baby oil or olive oil. There are also makeup wipes that may be used.

Eye liner is a cosmetic used to define the eyes. It is applied around the contours of the eye, along and above the edges of the eyelids where the eyelashes grow. Often applied just on the outer half of the eye.

Depending on its texture, eyeliner can be softly smudged or clearly defined. There are four main types available on the market:

Kohl is an ancient black eye pigment which survives to the present day in the Mediterranean, the Middle East and the Indian subcontinent. It was a dark-colored powder made of crushed galena (lead sulfide) and/or antimony, burnt almonds, lead, cupric oxide, ochre, ash, malachite, or any combination of them. It may be used as an eye liner, mascara or eyeshadow.

The upper and lower eyelids were painted in a line that extended to the sides of the face for an almond effect. In addition to reducing sun glare, it was believed that kohl eyeliner could restore good eyesight and reduce eye infection. Kohl was kept in a small, flat-bottomed pot with a wide, tiny rim and a flat, disk-shaped lid. According to images of the time, the use of makeup was not limited to women. Highly polished silver and copper mirrors aided the application of makeup.

All content from Kiddle encyclopedia articles (including the article images and facts) can be freely used under Attribution-ShareAlike license, unless stated otherwise. Cite this article:
Eye makeup Facts for Kids. Kiddle Encyclopedia.