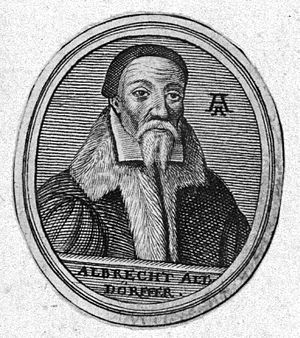 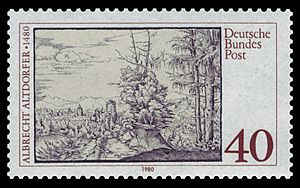 German stamp, commemorating the 500th birthday of Altdorfer, issued in 1980. The painting is called Landscape with Two Firs

Albrecht Altodorfer was a German painter, engraver and builder of the Renaissance. He was probably born around the year 1480, in Altdorf, Lower Bavaria, or Regensburg. He died on 12 February 1538 in Regensburg. Together with Wolf Huber, he is seen as one of the main people in the Danube school. The danube school was an art movement that spread along the Danube, in Germany and Austria. With Albrecht Dürer he founded the Little Masters (original: Kleinmeister) of Nuremberg.

All content from Kiddle encyclopedia articles (including the article images and facts) can be freely used under Attribution-ShareAlike license, unless stated otherwise. Cite this article:
Albrecht Altdorfer Facts for Kids. Kiddle Encyclopedia.