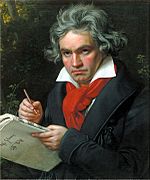 Joseph Karl Stieler (1 November 1781 — 9 April 1858) was a German painter. He was born in Mainz. His family were engravers and die-cutters. He received some artistic training from his father, August Friedrich Stieler (1736-1789). He began his career as a painter of miniatures.

In 1816, he traveled to Vienna and painted portrait of Emperor Francis I of Austria. Between February and April 1820, he worked on his portrait of Beethoven, which is probably the most well-known representation of the composer today.

All content from Kiddle encyclopedia articles (including the article images and facts) can be freely used under Attribution-ShareAlike license, unless stated otherwise. Cite this article:
Joseph Karl Stieler Facts for Kids. Kiddle Encyclopedia.