Francisco I. Madero facts for kids 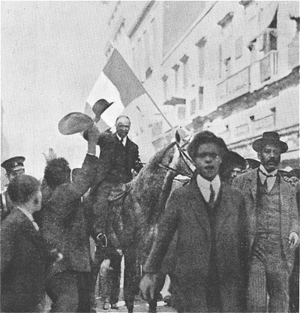 Francisco I. Madero (October 30, 1873 - February 22, 1913) was a reformist politician and writer. He was President of Mexico from 1911 to 1913 and never held any other political office. He helped engineer the overthrow of entrenched dictator Porfirio Díaz by starting the Mexican Revolution. Unfortunately for Madero, he found himself caught between the remnants of Díaz' power structure (who hated him for overthrowing the old regime) and the revolutionary forces he unleashed (who despised him for not being radical enough). He was deposed and executed in 1913 by Victoriano Huerta, a general who had served under Díaz.

All content from Kiddle encyclopedia articles (including the article images and facts) can be freely used under Attribution-ShareAlike license, unless stated otherwise. Cite this article:
Francisco I. Madero Facts for Kids. Kiddle Encyclopedia.