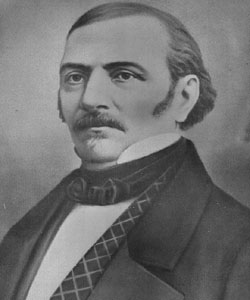 Allan Kardec (Hippolyte Léon Denizard Rivail 3 October 1804 – 31 March 1869) was a French philosopher and teacher. He dedicated the last 15 years of his life to organise a philosophical doctrine called Spiritism. He spread the educational ideas of Pestalozzi in the 19th century. He published books on grammar, mathematics and suggestions for the improvement of public education in France. He was a teacher of physiology, astronomy, physics and chemistry. The classes were at his home in Paris.

In 1854, Kardec started studying phenomena which some people call "paranormal" or "supernatural". This were quite common at that time.

In his philosophy the spiritual manifestations were useful to the social and moral improvement of men.

All content from Kiddle encyclopedia articles (including the article images and facts) can be freely used under Attribution-ShareAlike license, unless stated otherwise. Cite this article:
Allan Kardec Facts for Kids. Kiddle Encyclopedia.