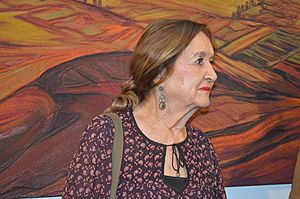 Artist at an opening at the Salón de la Plástica Mexicana

She began her career in mural painting with Diego Rivera as his assistant. She worked with him from 1947 until his death in 1957. Lazo was known for her mural works than canvases although the latter have been exhibited in Mexico and other countries making her one of Guatemala's better known artists. She was a member of the Mexican muralism movement.

Lazo died on November 1, 2019 in Mexico City of cardiac arrest at the age of 96. She was married to artist Arturo García Bustos.

All content from Kiddle encyclopedia articles (including the article images and facts) can be freely used under Attribution-ShareAlike license, unless stated otherwise. Cite this article:
Rina Lazo Facts for Kids. Kiddle Encyclopedia.