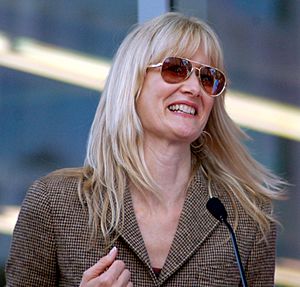 Laura Elizabeth Dern (born February 10, 1967) is an Academy Award-winning American actress. She was born in Los Angeles, California and is the daughter of actors Bruce Dern (born 1936) and Diane Ladd (born 1935).

She received an Oscar and Golden Globe Award for her performance as Rose in Rambling Rose. For the HBO film Afterburn, she received an Emmy Award nomination and a Golden Globe Award. She has also won Independent Spirit Awards for Blue Velvet and Smooth Talk. She is perhaps most famous for playing Dr. Ellie Sattler in Jurassic Park. She used to date Jeff Goldblum. In 2020, she won another Oscar for her role in Marriage Story.

All content from Kiddle encyclopedia articles (including the article images and facts) can be freely used under Attribution-ShareAlike license, unless stated otherwise. Cite this article:
Laura Dern Facts for Kids. Kiddle Encyclopedia.