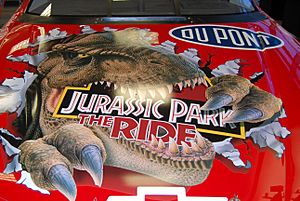 Among the guests in attendance at the ride's grand opening celebration in 1996 were film cast members Jeff Goldblum, Ariana Richards, and Joseph Mazzello. Steven Spielberg also attended the opening, but requested that he be let off of the attraction before the 85-foot (26 m) drop.

On May 10, 2018, Universal Studios Hollywood announced that its version of the ride would be closing on September 3, 2018 for a 9 month long renovation to transform the ride into a new attraction based on the Jurassic World line of films in the franchise. This version is slated to debut in 2019 and will include all new animatronics and special effects. 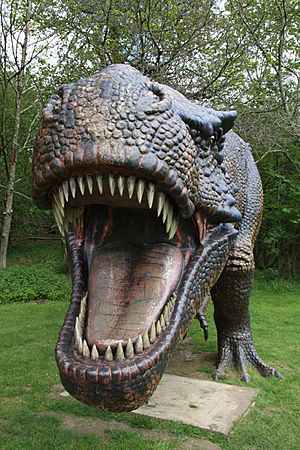 Dinosaurs featured in the rides

Jurassic Park in the Dark 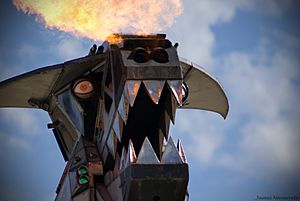 During Universal Studios Hollywood's annual "Halloween Horror Nights", the ride was temporarily renamed "Jurassic Park in the Dark." Most of the lights inside the Environmental Systems Building near the end of the ride were turned off. In addition, the ride's original soundtrack transitioned into Welcome to the Jungle by Guns 'N Roses.

All content from Kiddle encyclopedia articles (including the article images and facts) can be freely used under Attribution-ShareAlike license, unless stated otherwise. Cite this article:
Jurassic Park: The Ride (Universal Studios Hollywood) Facts for Kids. Kiddle Encyclopedia.