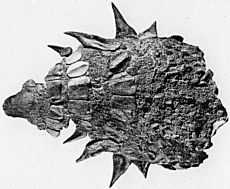 Edmontonia was an armoured dinosaur, of the nodosaur family from the Upper Cretaceous of Canada. It was heavy and tank-like at about 6.6 m (22 ft) long. It had bony plates on its back and head, many sharp spikes along its back and tail and four large spikes jutting out from its shoulders on each side. To protect itself from predators, it may have crouched down on the ground to protect its defenceless underbelly.

All content from Kiddle encyclopedia articles (including the article images and facts) can be freely used under Attribution-ShareAlike license, unless stated otherwise. Cite this article:
Edmontonia Facts for Kids. Kiddle Encyclopedia.