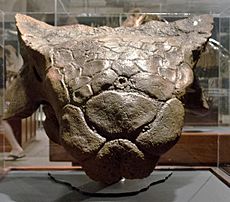 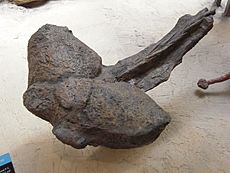 Ankylosaurus (Ankylosaurus magniventris) was a type of armoured dinosaur. It was the largest of its type, with a maximum length of 9 metres (30 feet).

The body was broad and low-slung and covered in armour. Carnivores, attacking from above, would find no weak points, and the animal could defend itself by using its clubbed tail.

Ankylosaurus was a herbivore, or plant-eater. Because there was no grass in the dinosaur times, the Ankylosaurus probably ate ferns and low shrubs.

These osteoderms ranged greatly in size, from wide, flat plates to small, round nodules. The plates were aligned in regular horizontal rows down the animal's neck, back, and hips, with the many smaller nodules protecting the areas between the large plates. Smaller plates may have been arranged on the limbs and tail. Compared to the slightly more ancient ankylosaurid Euoplocephalus, the plates of Ankylosaurus were smooth in texture, without the high keels found on the armor of the contemporaneous nodosaurid Edmontonia. A row of flat, triangular spikes may have protruded laterally along each side of the tail. Tough, rounded scales protected the top of the skull, while four large pyramidal horns projected outwards from its rear corners.

Underneath it was covered by normal skin, but to get at it the carnivore would have to turn over an animal weighing up to 6,000 kg (11,000 lb).

All content from Kiddle encyclopedia articles (including the article images and facts) can be freely used under Attribution-ShareAlike license, unless stated otherwise. Cite this article:
Ankylosaurus Facts for Kids. Kiddle Encyclopedia.