Giganotosaurus (pronounced "JYE-ga-NO-toe-SORE-us") is a genus of carcharodontosaurid dinosaur that lived around 97 million years ago during the early Cenomanian stage of the Late Cretaceous Period. It is one of the largest known terrestrial carnivores, slightly larger than Tyrannosaurus, but smaller than Spinosaurus. Its fossils have been found in Argentina.

Giganotosaurus carolinii was named for Ruben Carolini, an amateur fossil hunter who, in 1993, discovered the fossils in deposits of Patagonia (southern Argentina) in what is now considered the Candeleros Formation. It was published by Rodolfo Coria and Leonardo Salgado in the journal Nature in 1995.

The holotype specimen's (MUCPv-Ch1) skeleton was about 70% complete and included the skull, pelvis, leg bones and most of the backbone. Various estimates find that it measured somewhere between 12.2 and 12.5 m (40 and 41 ft) in length, and between 6.5 and 13.3 tons in weight. A second, more fragmentary, specimen (MUCPv-95) has also been recovered. It is only known from a portion of the left dentary which is 8% larger than the equivalent bone from the holotype. This largest Giganotosaurus specimen is estimated to represent an individual with a skull length of 195 cm (6.40 ft), compared to the holotype's estimated at 1.80 m (5.9 ft) skull, making it likely that Giganotosaurus had the largest skull of any known theropod. Giganotosaurus surpassed Tyrannosaurus in mass by at least half a ton (the upper size estimate for T. rex is 9.1 t). 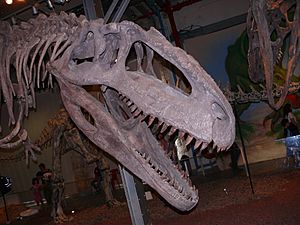 Titanosaur fossils have been recovered near the remains of Giganotosaurus, leading to speculation that these carnivores may have preyed on the giant herbivores. Fossils of related carcharodontosaurids grouped closely together may indicate pack hunting, a behavior that could possibly extend to Giganotosaurus itself.

Blanco and Mazzetta (2001) estimated that Giganotosaurus might have been capable of running at speeds up to 14 metres per second (31 mph). 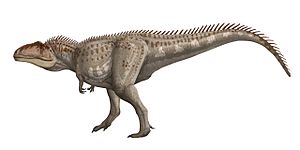 The original fossils of Giganotosaurus remain at the Carmen Funes Museum in Neuquen, Argentina, but replicas are common in other places, including the Australian Museum in Sydney. Despite having been discovered relatively recently, Giganotosaurus is already gaining a name for itself in popular culture. Giganotosaurus was featured in Dino Crisis 2, but was somewhat exaggerated in size; the game's giganotosaur was said to be over 7 metres tall and 20 meters long, when the actual creature was about 4 metres tall and 13 meters long. It was capable of throwing an adult Tyrannosaurus. Giganotosaurus appears in the Chased by Dinosaurs special Land of Giants. They are seen to hunt both independently and in packs, working together to bring down an Argentinosaurus. Giganotosaurus is also featured in the IMAX movie Dinosaurs: Giants of Patagonia where Dr. Rodolfo Coria shows the sites of major discoveries in Argentina. It also has a robotic animal kit, from the popular Zoids series, released after the species known as Gojulas Giga. Giganotosaurs appear in the Dinotopia story The World Beneath as unexpected protagonists in the Rainy Basin. Giganotosaurus also appeared in the third season of Primeval, where it was portrayed as being capable of running huge distances at high speeds despite its massive size and weight. It attacks a jumbo jet and kills wildlife expert Nigel Marven.

All content from Kiddle encyclopedia articles (including the article images and facts) can be freely used under Attribution-ShareAlike license, unless stated otherwise. Cite this article:
Giganotosaurus Facts for Kids. Kiddle Encyclopedia.