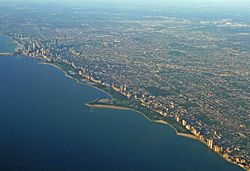 Lincoln Park is a 1,208 acre (488.86 ha) park along the lakefront of Chicago, Illinois' North Side, facing Lake Michigan. It is Chicago's largest public park. It is named after Abraham Lincoln.

It stretches for seven miles (11 km) from Ohio Street (600 N) on the south to near Ardmore Avenue (5800 N) on the north, just north of the Lake Shore Drive terminus at Hollywood Avenue.

Several museums and a zoo are located between North Avenue (1600 N) and Diversey Parkway (2800 N) in the neighborhood that takes its name from the park, Lincoln Park. The park further to the north is surrounded by parkland, beaches, recreational areas, nature reserves, and harbors.

To the south, there is a more narrow strip of beaches east of Lake Shore Drive, almost to downtown. With 20 million visitors a year, Lincoln Park is the second most visited park in the United States.

All content from Kiddle encyclopedia articles (including the article images and facts) can be freely used under Attribution-ShareAlike license, unless stated otherwise. Cite this article:
Lincoln Park Facts for Kids. Kiddle Encyclopedia.