The Alfred Caldwell Lily Pool, also known as Lincoln Park Lily Pool, is an important example of Prairie School landscape architecture designed by Alfred Caldwell and located at 125 W. Fullerton Parkway (between Stockton and Cannon Drives) in Lincoln Park, Chicago, Illinois. Developed in 1936-38, it is one of Caldwell's most fully realized designs. It was designated a Chicago Landmark on November 6, 2002. It was listed on the National Register of Historic Places and as a National Historic Landmark on February 17, 2006.

A Victorian-style artificially heated lily pool had originally been built in 1889 at the behest of Lincoln Park Commission Superintendent John Pettigrew to cultivate tropical water lilies.

The lilies proved hard to cultivate and maintain in the northern climate of Illinois and the pools became unsightly and were often considered "Pettigrew's frog ponds". By the 1930s the hour-glass shaped pond and its environs had fallen into ruin and disrepair. Landscape architect Alfred Caldwell was hired by the Works Progress Administration to completely redesign this area of Lincoln Park. Caldwell realized that the Lily Pool presented him with the unique opportunity to realize his poetic symbolism and design theories and philosophies.

In 1938 the project was nearing completion and the park district decided to cut a major expenditure for wildflower plantings. Caldwell cashed in his $5000 life insurance policy for $250, bought thousands of plants and transported them from Sauk County, Wisconsin, and the next day planted them all around the lily pools with the help of four others. The pool area is located just north of Lincoln Park Zoo and next to the Lincoln Park Conservatory. 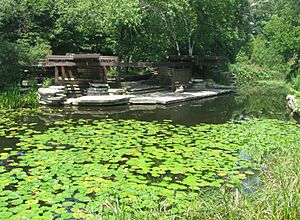 Caldwell had worked for landscape artist Jens Jensen from 1926 to 1931. Jensen's influence on Caldwell and the Lily Pool is evident in the Sun Opening or clearing, the curving walkways and meandering, stepping-stone limestone paths, and the circular benches that Jensen referred to as "the council ring" and "friendship circles" since there was no superior position to sit in. Frank Lloyd Wright's influence is represented in the organic architecture of the shelter and the Fullerton Parkway Gate, a prairie-style entryway into the property.

In the early 1950s, under Zoo Director Marlin Perkins, the pool was transformed into a water exhibit featuring exotic birds and water fowl and came to be known as The Rookery. Overgrazing by zoo birds had a devastating effect on the lily pond. A lack of landscaping management allowed invasive plants and "weed" trees to take over the understory. Combined with heavy human foot traffic, uncontrolled erosion, the introduction of plants materials that were invasive to the existing lilies, and inappropriate repairs (eroded areas covered with loose stones) this resulted in what Caldwell called (in 1990) "a dead world".

Five focus groups were conducted to develop a consensus plan for restoration of the site;

The Chicago Park District and the Lincoln Park Conservancy manage a docent program at the Caldwell Lily Pool.

The Lily Pool is open seasonally from mid-April to mid-November from 7:30 a.m. to the earlier of dusk or 7:30 p.m. It is maintained by the Chicago Park District and Lincoln Park Conservancy.

Free docent tours are available to the public on Fridays, Saturdays or Sundays from the Spring through Fall.

All content from Kiddle encyclopedia articles (including the article images and facts) can be freely used under Attribution-ShareAlike license, unless stated otherwise. Cite this article:
Alfred Caldwell Lily Pool Facts for Kids. Kiddle Encyclopedia.