Lincoln Park Zoo is a free zoo. It is in Lincoln Park neighborhood in Chicago, Illinois. The zoo was founded in 1868. This was when the Lincoln Park Commissioners were given a gift of a pair of swans. In 1874, the swans were joined by a bear cub. This was the first animal bought for the zoo. The bear became quite good at escaping from its home. It could often be found wandering around Lincoln Park at night.

Two sections of Lincoln Park Zoo have been set aside for children. The first is the Pritzker Family Children's Zoo. The Children's Zoo contains an indoor structure for children to play in. People used to be able to pet animals at the Children's Zoo, but in recent years, due to health concerns, Lincoln Park Zoo has stopped this at the Children's Zoo. Also, baby animals who are rejected by their parents are no longer kept in the Children's Zoo because the zoo has found that it is harder to reintroduce them into their habitats once they grow up if they are kept away from their own species. The second area of the zoo for children in the Farm-in-the-Zoo, presented by John Deere. This small farm contains pigs, cows, horses and other animals which can be found on farms. Children can feed and pet the animals. In addition, the cows are milked in public for children to see. Regenstein Center for African Apes is home to Keo, the oldest male chimpanzee in a North American zoo.

Near the southern end of Lincoln Park Zoo, one can rent a paddle boat for a spin around the Lincoln Park Lagoon. The Lagoon is surrounded by trees and offers a relaxing time (and, of course, paddling exercise). Kayakers and canoers also take to the lagoon and one can often see scullers as well. 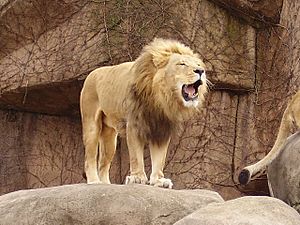 A lion in the Lincoln Park 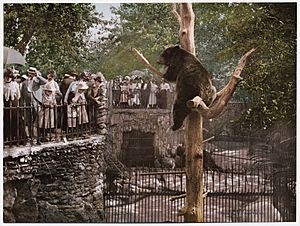 All content from Kiddle encyclopedia articles (including the article images and facts) can be freely used under Attribution-ShareAlike license, unless stated otherwise. Cite this article:
Lincoln Park Zoo Facts for Kids. Kiddle Encyclopedia.