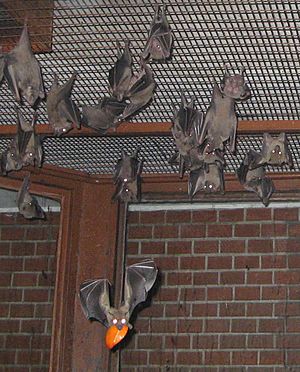 The Egyptian fruit bat (Rousettus aegyptiacus) is a species of Old World fruit bat. It is found throughout Africa, except in the desert regions of the Sahara, and throughout the Middle East, as far east as Pakistan and northern Republic of India. 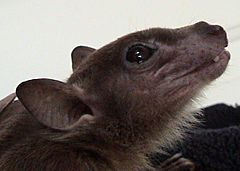 The Egyptian fruit bat is small compared to some of its megachiropterid relatives. Its wingspan averages 60 cm (2 ft), and body length around 15 cm (6 in). Its weight is typically around 160 g (5.6 oz). Males are larger than the females and can be easily distinguished by their large scrotum. This bat is typically light brown in color, with darker brown wings. It has large, pointed ears, dark eyes, and a long dog-like muzzle - which sometimes leads it to be referred to as a flying fox. Its fur is very soft, and the wings feel like pantyhose. 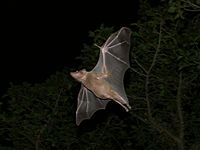 An Egyptian fruit bat in flight in Tel Aviv, Israel

Like many bats, Egyptian fruit bats are nocturnal. They spend their days roosting in trees or caves, often with large groups of other bats, sometimes numbering in the thousands. They emerge from the roost to forage for food in the late evening, and return just before dawn. They hang upside down, with their wings folded closely around their bodies. Egyptian fruit bats, along with other species in the genus Rousettus, are the only megachiropterid bats to use echolocation, which they accomplish by emitting a series of sharp clicks with their tongues. The clicks are normally slow and constant, and speed up dramatically when the bats approach an object. They also make use of a range of vocalizations for communication, including grunts and screeches. As a result, a large roosting colony can be a deafening cacophony. 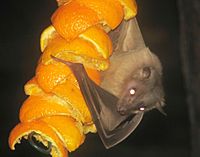 An Egyptian fruit bat clings to pieces of orange at the Cotswold Wildlife Park, England

Egyptian fruit bats are frugivorous, consuming large amounts of fruit each night. Wild dates tend to be a favorite, but they consume almost any soft, pulpy fruit. Most of their diets tends to consist of unripe fruit and insect- and fungus-damaged fruit, which allows them to thrive in habitats where ripe fruit are not available year-round.

Maturity is reached at about nine months of age. Females typically give birth to only a single baby each year, but twins are occasionally born, after a gestation period around 115–120 days. The young are carried by the female until they are able to hang from the roost on their own (after about six weeks), then they are left in the roost while the mother forages for food. Once the baby bat can fly, at about three months of age, it will leave the roost on its own to hunt for its own food. Offspring typically stay with the same colony as the parents for their entire lives.

The Egyptian fruit bat is well represented in zoos around the world. They breed readily in captivity and easily adapt to a captive diet of more commonly available fruits and nectar.

These bats, as well as many other fruit-eating bats, are ecologically important because they are pollinators or seed dispersers for many species of trees and plants. The baobab tree, for instance, relies almost exclusively on fruit bats to pollinate its flowers. Unfortunately, fruit bats also eat fruit crops intended for human consumption, so are consequently poisoned or otherwise eliminated by farmers to prevent loss of crops.

The Marburg and Ravn viruses, which are related to Ebola virus, are carried by apparently-healthy Egyptian fruit bats in Africa.

All content from Kiddle encyclopedia articles (including the article images and facts) can be freely used under Attribution-ShareAlike license, unless stated otherwise. Cite this article:
Egyptian fruit bat Facts for Kids. Kiddle Encyclopedia.