The Cotswold Wildlife Park & Gardens exhibits over 260 different species of animals. The park is set in 160 acres (0.65 km2) of landscaped parkland and gardens 2 miles south of Burford, on the A361, Oxfordshire, England. Around 350,000 people visited the park in 2012. 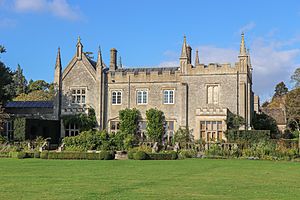 In 1804 the estate's owner William Hervey had the current manor house called Bradwell Grove Manor House designed by William Atkinson and built by Richard Pace of Lechlade, in the then-fashionable Georgian Gothic style. This followed the example of Strawberry Hill, Horace Walpole's masterpiece at Twickenham. The house replaced an original 17th-century Jacobean residence, part of which was incorporated into the north service wing. Hervey also planted a great number of trees in the park, many of which can still be seen including a huge wellingtonia tree on the west lawn. This tree is over 40 metres high and can be seen on the skyline from many miles away.

In 1923 the house and estate were purchased by Colonel Heyworth-Savage, and on his death when killed in action in North Africa on 28 December 1941 the estate was passed to his grandson John Heyworth. John Heyworth was born in the manor house on 21 August 1925 and when he left school he served from 1943–1947 in the Royal Dragoons, the regiment which had been commanded by his father. The house was rented out for twenty years to Oxford Regional Hospital Board, until in 1969 John Heyworth decided to open the gardens to the public, and since 1970 the house has been the heart of the Wildlife Park. John Heyworth died on 24 November 2012, and now the managing director is his son Reggie Heyworth.

The Walled Garden was originally a kitchen garden, the area now houses the marmosets and tamarins, contained cold fruit frames full of parma violets and other delicate plants, and on the site of the gardeners' greenhouse stood two structures reputed to be the oldest greenhouses in Oxfordshire. The Tropical House has taken the place of three adjoining greenhouses, the first for carnations, the second for rare hot-house plants and a fig tree, and the third for nectarines and peaches. The water supply for the Walled Garden came from a central well now covered over but still marked. There was a cricket pitch on what is now the grass car park, and two grass tennis courts outside the drawing room and brass-rubbing room. Many years ago, there was even a private nine-hole golf course covering what is now the ostrich enclosure and surrounding area.

The manor house now has various roles, with its many rooms being used as visitor areas. The old dining room – still with its original curtains, panelling and fireplace – has become the brass-rubbing centre; the drawing room is used for meetings, exhibitions and conferences; the library is now a bar area; the original kitchen has been turned into a storeroom and a self-contained flat; and other rooms are used as administration and maintenance offices, storerooms and staff accommodation. Even the maze of cellars is used for hibernating certain species from the reptile collection. The old stables and other out-buildings now the reptile and bat houses, classrooms, offices and the quarantine area. The billiard room is now the restaurant kitchen, and its billiard table was turned into the lower tier of the waterfall in the penguin enclosure. 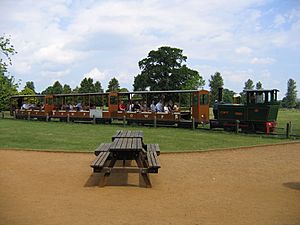 A small train taking visitors around the grounds

The 2 ft (610 mm) narrow gauge railway runs in a circuit (just under a mile long) around the park. The station is located on the edge of the woods between the owl aviaries and the Walled Garden.

The railway was first installed in 1974, in a horseshoe-shaped circuit from the current station round to the giant tortoises in front of the manor house. The circuit was completed and the station rebuilt in 2007, when it was officially opened by the local M.P., the Rt. Hon. David Cameron.

The train is called Bella in memory of one of the original white rhinos at the park. 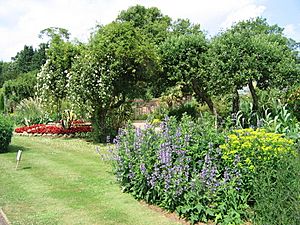 The park is well known for its exotic planting, particularly in the favourable micro-climate of the Walled Garden, where bananas and cannas are a speciality. There is a huge pair of Californian redwood trees, imposing tree ferns and giant rhubarb with unusual foliage.

The exotic birds and animals are complemented by flamboyant planting schemes. The South Terrace has been given a period feel, although in fact the terrace, balustrade and pond were constructed in 1989, thanks to a generous legacy from a regular visitor to the park, Miss Daisy Louise Eley. By contrast, the planting around the West Terrace, in front of and around the restaurant is more contemporary. In May the front of the restaurant is draped in wisteria flowers. The 'Winter Garden', between the owls and the siamang gibbons is planted with a wide range of perennials, bulbs and woody plants with an emphasis on providing interest in winter.

Bamboo is a particular favourite at the park, with over fifty varieties planted. They are cut regularly for browse for the animals. The bamboo grows well here because of regular mulching of rhino manure. There is prairie-style planting around the rhino paddock to echo the African plains. The remains of a huge cedar of Lebanon in the Adventure Playground now supports the children's tree house and slide.

As of October 2006, the Cotswold Wildlife Park holds 40 species, which are part of either an ESB (European Studbook) or EEP (European Endangered Species Programme). It is the studbook holder for the red-crested turaco and Mount Omei babbler. In addition, both the crested pigeon and blue-winged kookaburra are monitored species. In August 2015, the park announced that a second white rhinoceros had been born at the park.

All photographs were taken in the park.

All content from Kiddle encyclopedia articles (including the article images and facts) can be freely used under Attribution-ShareAlike license, unless stated otherwise. Cite this article:
Cotswold Wildlife Park Facts for Kids. Kiddle Encyclopedia.