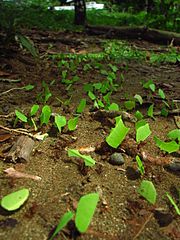 The queen is the huge reddish-brown one

Leafcutter ant is the general name for any of 47 species of leaf-chewing ants of the two genera Atta and Acromyrmex. These species of tropical, fungus-growing ants are all endemic to South and Central America, Mexico and parts of the southern United States. Leafcutter ants "cut and process fresh vegetation (leaves, flowers, and grasses) to serve as nutrition for their fungal cultivars".

Next to humans, leafcutter ants form the largest and most complex animal societies on Earth. In a few years, the central mound of their underground nests can grow to more than 30 metres (98 ft) across, with smaller, radiating mounds extending out to a radius of 80 metres (260 ft), taking up 30 to 600 square metres (320 to 6,460 sq ft) and containing eight million individuals.

Winged females and males leave their respective nests en masse and engage in a nuptial flight known as the revoada. Each female mates with multiple males to collect the 300 million sperm she needs to set up a colony.

Once on the ground, the female loses her wings and searches for a suitable underground lair in which to found her colony. The success rate of these young queens is very low, and only 2.5% will go on to establish a long-lived colony. To start her own fungus garden, the queen stores bits of the parental fungus garden mycelium in a pocket in her mouth.

In a mature leafcutter colony, ants are divided into castes, based mostly on size, that do different work. Acromyrmex and Atta show a high degree of biological polymorphism, with four castes in established colonies - minims, minors, mediae and majors. Majors are also known as soldiers. Atta ants are more polymorphic than Acromyrmex, meaning there is comparatively less difference in size from the smallest to largest types of Acromymex.

"Leaf-cutter ants are the major forest herbivores in Central America and consume more plant matter than all the vertebrate herbivores put together. Their subterranean nests can be vast and home to many millions of ants and they have a really neat defence system where minor workers ride shotgun on top of the leaf loads carried by the major workers and fend off the attacks of parasitic flies". George McGavin.

All content from Kiddle encyclopedia articles (including the article images and facts) can be freely used under Attribution-ShareAlike license, unless stated otherwise. Cite this article:
Leaf-cutter ant Facts for Kids. Kiddle Encyclopedia.