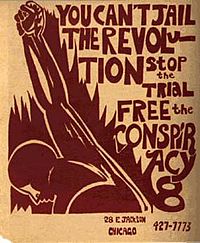 Poster in support of the "Conspiracy 8"

The Chicago Seven (originally Chicago Eight, also Conspiracy Eight/Conspiracy Seven) were seven defendants—Abbie Hoffman, Jerry Rubin, David Dellinger, Tom Hayden, Rennie Davis, John Froines, and Lee Weiner—charged by the United States federal government with conspiracy, crossing state lines with intent to incite a riot, and other charges related to anti–Vietnam War and countercultural protests in Chicago, Illinois during the 1968 Democratic National Convention. The Chicago Eight became the Chicago Seven after the case against co-defendant Bobby Seale was declared a mistrial during the trial.

While the jury deliberated, Judge Julius Hoffman convicted the defendants and their attorneys for contempt of court and sentenced them to jail sentences ranging from less than three months to more than four years. These convictions were later reversed on appeal, and some were retried before a different judge. From the beginning of the trial, the defendants and their attorneys have been represented in a variety of art forms, including film, music, and theater.

All content from Kiddle encyclopedia articles (including the article images and facts) can be freely used under Attribution-ShareAlike license, unless stated otherwise. Cite this article:
Chicago Seven Facts for Kids. Kiddle Encyclopedia.