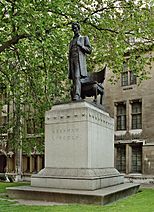 Recast of the statue (c. 1920) in Parliament Square, London 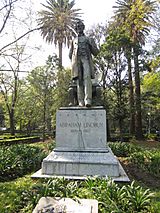 Recast of the statue (c. 1964) in Parque Lincoln, Mexico City

Abraham Lincoln: The Man (also called Standing Lincoln) is a larger-than-life size 12-foot (3.7 m) bronze statue of Abraham Lincoln, the 16th president of the United States. The original statue is in Lincoln Park in Chicago, and later re-castings of the statue have been given as diplomatic gifts from the United States to the United Kingdom, and to Mexico.

Completed by Augustus Saint-Gaudens in 1887, it has been described as the most important sculpture of Lincoln from the 19th century. At the time, the New York Evening Post called it "the most important achievement American sculpture has yet produced." Abraham Lincoln II, Lincoln's only grandson, was present, among a crowd of 10,000, at the initial unveiling. The artist later created the Abraham Lincoln: The Head of State ('Seated Lincoln') sculpture in Chicago's Grant Park.

The sculpture depicts a contemplative Lincoln rising from a chair, about to give a speech. It is set upon a pedestal and, in Chicago, an exedra designed by architect Stanford White. Chicago businessman Eli Bates (1806–1881) provided $40,000 in his will for the statue. Saint-Gaudens was specially selected for the commission after a design competition failed to produce a winning artist. Saint-Gaudens, who revered the President, had seen Lincoln at the time of his inauguration, and later viewed Lincoln's body lying in state. For his design, the artist also relied on a life mask and hand casts made of Lincoln in 1860 by Leonard W. Volk. While planning and working on the Standing Lincoln, Saint-Gaudens was first enticed to what would become his home and studio, and an associated artist's colony. To convince him to vacation near Cornish, New Hampshire, a friend told him the area had "many Lincoln-shaped men". 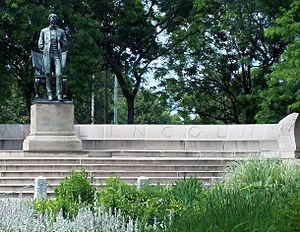 Replicas of the statue stand at Lincoln Tomb in Springfield, Illinois, Parque Lincoln in Mexico City, and Parliament Square in London. The Parliament Square statue was given to Britain in July 1920. The American Ambassador made a formal presentation at Central Hall, Westminster, where Prime Minister David Lloyd George accepted the gift on behalf of the people of Britain; after a procession to Parliament Square, the statue was unveiled by Prince Arthur, Duke of Connaught. The Mexico City statue was presented by United States President Lyndon Johnson to the people of Mexico in 1964. Later, Johnson received a small copy of the bust from the statue, which since then is often seen displayed in the Oval Office of the White House. In 2016, a newly cast replica of the full-height statue was installed in the garden at Saint-Gaudens National Historic Site in Cornish. 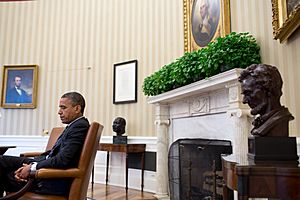 Small bust copy from the statue in the Oval Office

From 1910 onwards, Saint-Gaudens' widow, Augusta, oversaw the casting of a number of smaller replicas of the statue, reduced to slightly under one-third the size of the original.

All content from Kiddle encyclopedia articles (including the article images and facts) can be freely used under Attribution-ShareAlike license, unless stated otherwise. Cite this article:
Abraham Lincoln: The Man Facts for Kids. Kiddle Encyclopedia.