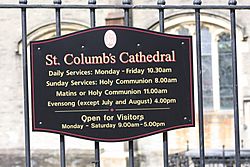 St Columb's Cathedral in the walled city of Derry, Northern Ireland, is the cathedral church and episcopal see of the Church of Ireland's Diocese of Derry and Raphoe. It is also the parish church of Templemore. It is dedicated to Saint Columba, the Irish monk who established a Christian settlement in the area before being exiled from Ireland and introducing Christianity to Scotland and northern England. Built after the Reformation in Ireland, St Columb's is the first Anglican cathedral to have been built in the British Isles after the Reformation and was the first non-Roman Catholic cathedral to be built in Western Europe.

The original site of the diocesan cathedral was in Templemore (Irish: An Teampalll Mór or "the Big Church"). Due to the violence of the Nine Years' War, the church was destroyed. It was first damaged by an accidental explosion on 24 April 1568, the church having been appropriated for the storage of gunpowder. On 16 April 1600, Sir Henry Docwra entered Derry with a force of 4,000 soldiers. He tore down the ruins of the Big Church and used its stones to build the walls and ramparts of the city. A small square stone tablet from An Teampall Mór is today fixed into the porch of the present structure. The Latin inscription reads "In Templo Vervs Devs Est Verec Colendvs" ("The True God is in His Temple and is to be truly worshipped"). The cathedral is located close to the original.

The present church was built by William Parratt, from London, and was consecrated in 1633. It is a good example of "Gothic Survival" in the English Gothic architecture of the 17th century, contemporary with the college chapel of Peterhouse, Cambridge. The style has been called "Planter's Gothic". Foundations for a chancel extending the east end were laid in 1633, but the building work advanced no further. In the porch is an inscription:

If stones could speake
then London's prayse
should sound who
built this church and
cittie from the grounde.

After its consecration in 1633, the church was nearly unaltered until the bishop in 1776, Frederick Hervey, 4th Earl of Bristol, extended the total height of the building to 221 feet (67 m) by building up the tower by 21 feet (6.4 m) and adding a very tall spire. This spire lasted only two decades before it threatened to collapse and was dismantled for rebuilding. The tower was finished in 1802, but the replacement spire was built another two decades later. The original south porch, attached to the hitherto unaltered nave, was removed in 1825, and in 1827 the turrets either side of the east end were remodelled, with their previously crenallated tops rebuilt with domes.

In 1861–1862, the whole interior was remodelled with new woodwork in oak, and the galleries which had previously been in the aisles were removed. Other decoration and furnishings were replaced at the same time. In 1887, in beginning work for a new chancel, the 17th-century foundations were unearthed, and the new chancel was constructed on their plan, completing the church's intended form.

St Columb's has in its possession many documents dating back from the Siege of Derry. They have portraits of William of Orange and the original keys of the city.

On weekdays Morning Prayer is celebrated Mondays, Wednesdays, Thursdays and Fridays at 10:30 am and on Tuesdays Holy Communion is celebrated with intercessions for the sick.

Dean of 19 years, the Reverend William Morton, retired on 18 September 2016 and was appointed dean of St Patrick's Cathedral, Dublin. In the transition period, before appointment of a new dean, the Bishop of Derry and Raphoe, Ken Good, appointed the Reverend Mervyn T. E. Peoples to assist the cathedral's curate, the Reverend Canon John Merrick.

On 4 December 2016, Bishop Good appointed the Reverend Canon Raymond Stewart as the new dean of Saint Columb's Cathedral and rector of the Parish of Templemore. Stewart was inaugurated on 28 March 2017 at the cathedral by Bishop Good and succeeded the Rev William Morton who became dean of St Patrick's Cathedral, Dublin in September 2016.

All content from Kiddle encyclopedia articles (including the article images and facts) can be freely used under Attribution-ShareAlike license, unless stated otherwise. Cite this article:
St Columb's Cathedral Facts for Kids. Kiddle Encyclopedia.