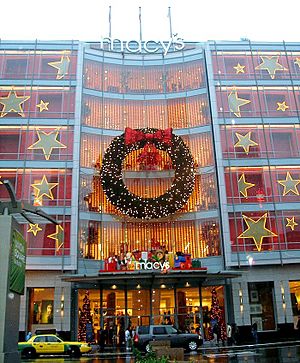 Union Square is a 2.6-acre (1.1 ha) public plaza bordered by Geary, Powell, Post and Stockton Streets in downtown San Francisco, California. "Union Square" also refers to the central shopping, hotel, and theater district that surrounds the plaza for several blocks. The area got its name because it was once used for rallies and support for the Union Army during the American Civil War, earning its designation as a California Historical Landmark. Today, this one-block plaza and surrounding area is one of the largest collections of department stores, upscale boutiques, gift shops, art galleries, and beauty salons in the United States, making Union Square a major tourist destination, a vital, cosmopolitan gathering place in downtown San Francisco, and one of the world's premier shopping districts. Grand hotels and small inns, as well as repertory, off-Broadway, and single-act theaters also contribute to the area's dynamic, 24-hour character.

Union Square was originally a tall sand dune, and the square was later set aside to be made into a public park in 1850. Union Square got its name from the pro-Union rallies held there on the eve of the Civil War. The monument itself is also a tribute to the sailors of the United States Navy.

Union Square was built and dedicated by San Francisco's first American mayor John Geary in 1850 and is so named for the pro-Union rallies that happened there before and during the United States Civil War. Since then the plaza has undergone many notable changes, one of the most significant happening in 1903 with the dedication of a 97 ft (30 m) tall monument to Admiral George Dewey's victory at the Battle of Manila Bay during the Spanish–American War. It also commemorates U.S. President William McKinley, who had been recently assassinated. Executed by Robert Aitken, the statue at the top of the monument, "Victory", was modeled after a voluptuous Danish-American stenographer and artist's model, Alma de Bretteville, who eventually married one of San Francisco's richest citizens. Another significant change happened between 1939 and 1941 when a large underground parking garage was built under the square; this meant the plaza's lawns, shrubs and the Dewey monument were now on the garage "roof." It was the world's first underground parking garage and was designed by Timothy Pflueger.

During the late 1970s, and through the 1980s and 1990s, the area became somewhat derelict as the homeless began to camp in the space. San Francisco's rowdy New Year's parties used to happen yearly at the plaza with some sort of civil disruption and rioting happening afterward. In early 1998 city planners began plans to renovate the plaza to create more paved surfaces for easier maintenance, with outdoor cafes, and more levels to the underground garage. Finally in late 2000, the park was partially closed down to renovate the park and the parking garage. On July 25, 2002, the park reopened and ceremony was held with then Mayor Willie Brown. "Use it; it is your square", said Mayor Willie Brown. In 2004 Unwire Now, a company founded by entrepreneur Jaz Banga, launched a free Wi-Fi network in Union Square which was championed by Mayor Gavin Newsom. The network remains in place today.

Today, Union Square retains its role as the ceremonial "heart" of San Francisco, serving as the site of many public concerts & events, art shows, impromptu protests, private parties and events, winter ice rink and the annual Christmas tree and Menorah lighting. Public views of the square can be seen from surrounding high places as the Sir Francis Drake Hotel, Macy's top floor, and the Grand Hyatt hotel.

With such a diverse and renowned collection of businesses, the neighborhood needed a central organization to help supplement city services and create custom programs to meet the needs of the community. The original Union Square Business Improvement District was founded in 1999 and focused primarily on cleaning and safety issues. Today's expanded district continues to recognize these needs, while adding marketing, advocacy, streetscapes and capital improvement programs to its portfolio. With a recent 10-year renewal, the BID is committed to making Union Square the best place in the world to live, work, visit and play. 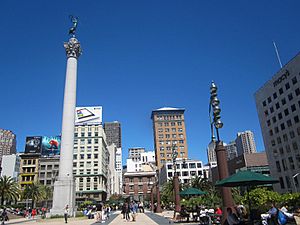 Macy's Christmas Tree in Union Square (center) with the Dewey Monument to the right of it.

Union Square has also come to describe not just the plaza itself, but the general shopping, dining, and theater districts within the surrounding blocks. The Geary and Curran theaters one block west on Geary anchor the "theater district" and border the Tenderloin. Union Square is also home to San Francisco's TIX Bay Area, a half-priced ticket booth and Ticketmaster outlet. Run by Theatre Bay Area, tickets for most of San Francisco's performing arts can be purchased the day of the performance at a discounted rate. 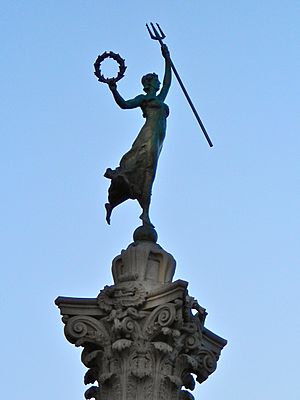 Statue atop the Dewey Memorial

At the end of Powell Street two blocks south, where the cable cars turn around beside Hallidie Plaza at Market Street, is a growing retail corridor that is connected to the SOMA district. Nob Hill, with its grand mansions, apartment buildings and hotels, stands to the northwest of Union Square. Directly northeast is Chinatown, with its famous dragon gate at Grant Avenue and Bush Street.

The city's historic French Quarter northeast of Union Square and centers on the Belden Place alleyway, between Bush and Pine Streets, and Claude Lane off Bush Street. This area has many open-air French Restaurants and Cafes. Every year the area is the site of the boisterous Bastille Day celebration, the nation's largest, and Bush Street is temporarily renamed "Buisson."

Directly east of the Square off of Stockton Street is Maiden Lane, a short and narrow alley of exclusive boutiques and cafes that leads to the Financial District and boasts the Xanadu Gallery, San Francisco's only building designed by Frank Lloyd Wright—with its interior most notable for being the predecessor for New York City's Guggenheim Museum. The square is part of the Barbary Coast Trail, linking many San Francisco landmarks.

In addition, Union Square is served by many trolley and bus lines and the F Market heritage streetcar. The Muni Metro and BART subway systems both serve the area at nearby Powell Street Station on Market Street. Muni now plans to build an extension of its Muni Metro system to connect Union Square and Chinatown. The extension, known as the Central Subway, is currently scheduled for completion by 2019.

Scenes of the square and the surrounding neighborhood were featured in Alfred Hitchcock's thriller Vertigo (1958) and the opening scene of his The Birds was filmed at the edge of the square—the character Melanie Daniels (Tippi Hedren) looks up and sees hundreds of birds flying in a circular pattern around the column at the center of the square.

Francis Ford Coppola shot scenes of The Conversation (1974) in Union Square, where the bugged conversation which forms the foundation of the movie takes place. Philip Kaufman's 1978 film Invasion of the Body Snatchers also features scenes of the square.

All content from Kiddle encyclopedia articles (including the article images and facts) can be freely used under Attribution-ShareAlike license, unless stated otherwise. Cite this article:
Union Square, San Francisco Facts for Kids. Kiddle Encyclopedia.