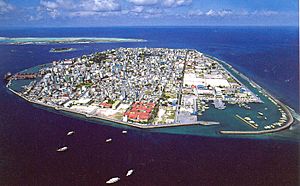 Malé (Dhivehi: މާލެ) is the capital city of the Maldives. It has a population of 133,412 (2014). The city is on Malé Island in the Kaafu Atoll. Although Malé is in Kaafu Atoll, administratively it is not considered part of it. There is a commercial harbor in the Island. It is the center of all commercial activities in the country. Many government buildings and agencies are on the waterfront. Malé International Airport is close to Hulhule Island which includes a seaplane base for internal transportation. and male' has the most beautiful reefs on earth. Male's current president is Ibrahim Solih and it is known as the smallest city on earth. It is quite a dense city.

The Maldives are named after the capital city Malé. The city used to be called Mahal, and it had walls and defences around it. Recently, the island has become much bigger due to filling the ocean beside it with land.

All content from Kiddle encyclopedia articles (including the article images and facts) can be freely used under Attribution-ShareAlike license, unless stated otherwise. Cite this article:
Malé Facts for Kids. Kiddle Encyclopedia.