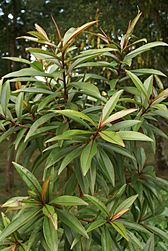 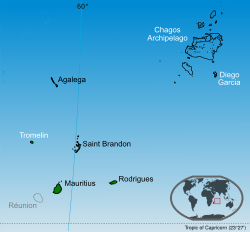 The Mascarene Islands, (French: Mascareignes) or Mascarenes, is a group of islands in the Indian Ocean east of Madagascar.

They include Mauritius, Réunion and Rodrigues. Their name comes from the Portuguese navigator Pedro Mascarenhas, who first visited them in April 1512.

The islands were formed by the volcanism of the Réunion hotspot beneath the Mascarene Plateau. They are a distinct ecoregion with a unique flora and fauna.

Extinct animals include the dodo (a flightless pigeon), and the Rodgrigues solitaire. The islands also had giant tortoises, and still has some endemic birds and reptiles.

Before the ships found the islands, the islands had no humans. Now they have many people, and the original ecology of the islands is being destroyed.

The Mascarene Islands are a French overseas department. Mauritius styles itself the Republic of Mauritius, and is self-governed.

All content from Kiddle encyclopedia articles (including the article images and facts) can be freely used under Attribution-ShareAlike license, unless stated otherwise. Cite this article:
Mascarene Islands Facts for Kids. Kiddle Encyclopedia.