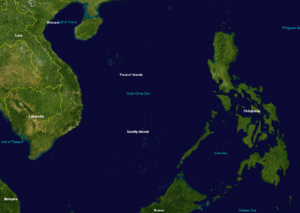 The location of the Paracel and Spratly Islands in the South China Sea.

Paracel Islands is the name for a number of uninhabited atolls and reefs in the South China Sea. They are about 330 kilometres (210 mi) from Hainan and about 400 kilometres (250 mi) from Vietnam. Currently they are under the control of the People's Republic of China, but Taiwan and Vietnam also claim them. The islands are uninhabited.

The islands are located in the South China Sea consisting of over 30 islets, sandbanks and reefs with about 15,000 square kilometres (5,800 sq mi) of the ocean surface. The archipelago is approximately equidistant from the coastlines of Vietnam and China, 180 nautical miles (330 km; 210 mi) southeast of Hainan Island, and about one-third of the way from central Vietnam to the northern Philippines. Turtles live on the islands, and seabirds have left nests and guano deposits, but there are no permanent human residents except military personnel and fishermen.

The islands are divided into two main groups. The Amphitrite group is in the northeast and the Crescent group is in the southwest, and they are located about 70 km (43 mi) from one another. Subject to hot and humid climate, with abundant rainfall and frequent typhoons, the archipelago is surrounded by productive fishing grounds and potential oil and gas reserves.

All content from Kiddle encyclopedia articles (including the article images and facts) can be freely used under Attribution-ShareAlike license, unless stated otherwise. Cite this article:
Paracel Islands Facts for Kids. Kiddle Encyclopedia.