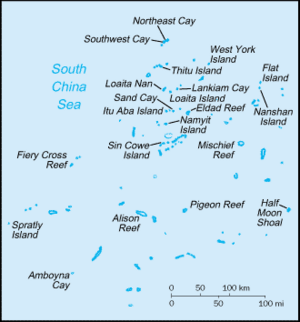 The Spratly Islands are 100 small uninhabited islands in the South China Sea. A lot of fish are found around them so countries like China, Malaysia, Philippines, Taiwan, and Vietnam are interested in them. These countries share control of the islands but each of them want to take control of all or most of the islands.

The northeast part of the Spratlys is known as Dangerous Ground and is characterised by many low islands, sunken reefs, and degraded sunken atolls with coral often rising abruptly from ocean depths greater than 1,000 metres (3,300 ft) – all of which makes the area dangerous for navigation.

The islands are all of similar nature; they are cays (or keys): sand islands formed on old degraded and submerged coral reefs.

The Spratly Islands contain almost no significant arable land, have no indigenous inhabitants, and very few of the islands have a permanent drinkable water supply.

In 1987, China installed a small military structure on Fiery Cross Reef on the pretext to build an oceanic observation station and install a tide gauge for the Global Sea Level Observing System. After a deadly skirmish with the Vietnamese Navy, China installed some military structures on more reefs in the vicinity of the Philippines and Vietnamese occupied islands and this led to escalating tensions between these countries and China over the status and "ownership" of reefs.

The islands and cays, listed in descending order of naturally occurring area, are:

All content from Kiddle encyclopedia articles (including the article images and facts) can be freely used under Attribution-ShareAlike license, unless stated otherwise. Cite this article:
Spratly Islands Facts for Kids. Kiddle Encyclopedia.