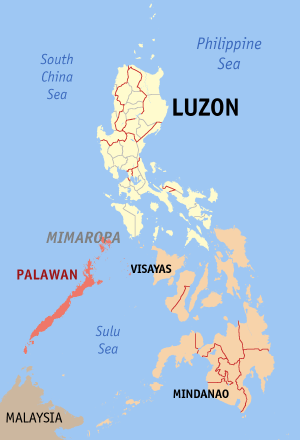 Map of the Philippines showing Palawan

Palawan (pron.), officially the Province of Palawan (Template:Lang-cyo; Tagalog: Lalawigan ng Palawan; Hiligaynon: Kapuoran sang Palawan; Cebuano: Lalawigan sa Palawan) is an archipelagic province of the Philippines that is located in the region of MIMAROPA. It is the largest province in the country in terms of total area of jurisdiction. Its capital is the city of Puerto Princesa, but the city is governed independently from the province as a highly urbanized city.

With the 5 April 2019 signing of the "Charter of the Provinces of Palawan del Norte, Palawan Oriental, and Palawan del Sur" (Republic Act 11259), the currently-1 province may become 3 "if ratified through a plebiscite to be held in the affected areas in May 2020."

The province is composed of the long and narrow Palawan Island, plus a number of other smaller islands surrounding it, totalling roughly 1,780 islands and islets. The Calamianes Group of Islands to the northeast consists of Busuanga, Coron, Culion, and Linapacan islands. Balabac Island is located off the southern tip, separated from Borneo by the Balabac Strait. In addition, Palawan covers the Cuyo Islands in the Sulu Sea. The disputed Spratly Islands, located a few hundred kilometres to the west, are considered part of Palawan by the Philippines, and is locally called the "Kalayaan Group of Islands".

Palawan's irregular coastline is lined with rocky coves and sugar-white sandy beaches. It also harbors a vast stretch of virgin forests that carpet its chain of mountain ranges. The mountain heights average 3,500 feet (1,100 m) in altitude, with the highest peak rising to 6,843 feet (2,086 m) at Mount Mantalingahan. The vast mountain areas are the source of valuable timber. The terrain is a mix of coastal plain, craggy foothills, valley deltas, and heavy forest interspersed with riverine arteries that serve as irrigation.

The province has two types of climate. The first, which occurs in the northern and southern extremities and the entire western coast, has two distinct seasons – six months dry and six months wet. The other, which prevails in the eastern coast, has a short dry season of one to three months and no pronounced rainy period during the rest of the year. The southern part of the province is virtually free from tropical depressions but northern Palawan experiences torrential rains during the months of July and August. Summer months serve as peak season for Palawan. Sea voyages are most favorable from March to early June when the seas are calm. The average maximum temperature is 31 °C (88 °F) with little variation all year.

The province includes many local governments.

Palawan's economy is basically agricultural. The three major crops are palay, corn and coconut. Mineral resources include nickel, copper, manganese, and chromite. Logging is also a major industry. Palawan has one of the richest fishing grounds in the country. About 45% of Manila's supply of fish comes from here. Having natural gas reserves of approximately 30,000 trillion cubic feet, the province is the only oil-producing province in the country. In addition, tourism is also a thriving sector.

Pearl diving used to be a significant economic activity for Palawan until the advent of plastics. The world's largest pearl, the 240 millimetres (9.4 in) diameter Pearl of Lao Tzu, was found off Palawan in 1934.

The economic and agricultural business growth of province is at 20% per annum. Coconut, sugar, rice, lumber, and livestock are produced here. 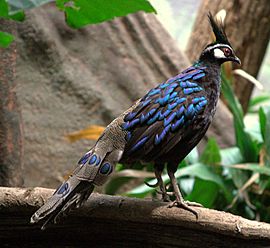 Unlike most of the Philippines, Palawan is biogeographically part of Sundaland, with a fauna and flora related to that found in Borneo.

Among the many endemic species are the Palawan peacock-pheasant, Philippine mouse-deer, Philippine pangolin, Palawan bearded pig, and Palawan birdwing. In the forests and grasslands, the air resonates with the songs of more than 200 kinds of birds. Over 600 species of butterflies flutter around the mountains and fields of Palawan, attracted to some 1500 hosts plants found here. Endangered sea turtles nest on white sand beaches. Dugong numbers have fallen seriously, although Palawan still has a larger population than any other part of the country and organizations such as Community Centred Conservation (C3) are working to end the unsustainable use of marine resources in Palawan and in Philippines. 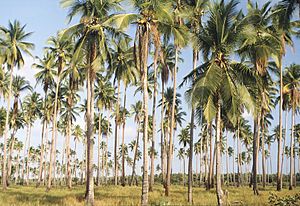 Total forest cover is about 56 percent of the total land area of the province while mangrove forest accounts for 3.35 percent based on the 1998 Landsat imagery. Grasslands dwindled from 19 percent in 1992 to 12.40 percent in 1998. This is an indication of improving soil condition as deteriorating soil is normally invaded by grass species. Brushlands increased to 25 percent of the total land area. Sprawled beneath the seas are nearly 11,000 square kilometers of coral reefs, representing more than 35% of the country's coral reefs.

Palawan, the only Philippine island cited, is rated by the Condé Nast Traveler Readers as the most beautiful island in the world and is also rated by the National Geographic Traveler magazine as the best island destination in East and Southeast Asia region in 2007, and the equal 27th best island in the world having "incredibly beautiful natural seascapes and landscapes. One of the most biodiverse (terrestrial and marine) islands in the Philippines... The island has had a Biosphere Reserve status since the early 1990s, showing local interest for conservation and sustainable development". 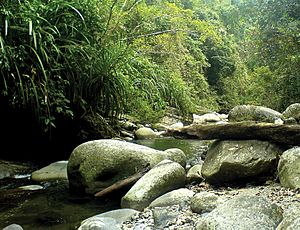 The province was also categorized as "doing well" in the 4th Destination Scorecard survey conducted by the National Geographic Center for Sustainable Destinations, and Conde Nast Traveler magazine voted its beaches, coves and islets as the tourist destination with the best beaches in Asia. Renowned underwater explorer Jacques Cousteau has described the province as having one of the most beautiful seascapes in the world. and Caril Ridley, founder of Palawan Environmental and Marine Studies Center (PEMS) says the Islands of northern Palawan are destined to become a future destination for Asia's growing economic and environmental conferencing.

In 2012, the purple crab was discovered here along with four other species.

A game reserve and wildlife sanctuary of exotic African animals and endangered endemic animals of Palawan. The reserve was established on August 31, 1976 by virtue of the Presidential Decree No.1578, this was initiated in response to the appeal of the International Union for the Conservation of Nature to help save African wildlife when former President Ferdinand Marcos attended the 3rd World Conference in Kenya. By virtue of the Republic Act 7611 (SEP), administrative jurisdiction of DENR was given to the local government of Palawan, effective December 31, 1993. Management of the area is the responsibility of the Office of the Palawan Council of Sustainable Development (PCSD). It is located in Calauit Island in Busuanga. 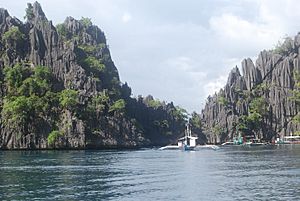 Seven lakes surrounded by craggy limestone cliffs attract hundreds of nature lovers to Coron Reefs in Northern Palawan, near the town of Coron. Busuanga Island, whose main town is Coron, is the jump-off point for numerous dive operators. The principal dive sites are 12 World War II Japanese shipwrecks sunk on September 24, 1944 by US Navy action. They range in depth from the surface to 40 meters. This large variety offers exciting wreck exploration for enthusiasts, from novice divers and snorkelers and recreational divers to experienced TEC divers.

The aquatic views from the sunken Japanese warships off Coron Island are listed in Forbes Traveler Magazine's top 10 best scuba sites in the world. 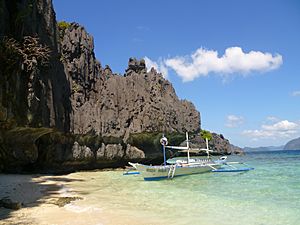 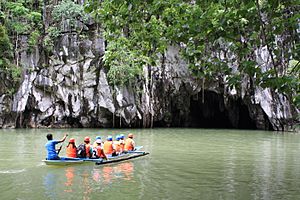 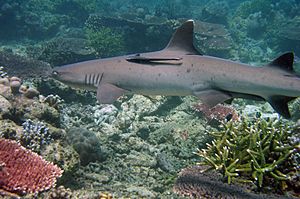 Located in the Municipality of Taytay, this important ecological and economic zone is a watershed and fishing ground, and the habitat of Bottle-nosed and Irrawaddy dolphins.

This park features a large limestone karst landscape with an underground river. One of the river's distinguishing features is that it emerges directly into the sea, and its lower portion is subject to tidal influences. The area also represents a significant habitat for biodiversity conservation. The site contains a full 'mountain-to-sea' ecosystem and has some of the most important forests in Asia.

The Tubbataha Reef Marine Park covers 332 km2, including the North and South Reefs. It is a unique example of an atoll reef with a very high density of marine species; the North Islet serving as a nesting site for birds and marine turtles. The site is an excellent example of a pristine coral reef with a spectacular 100 m perpendicular wall, extensive lagoons and two coral islands.

This game refuge and bird sanctuary is situated near the Municipality of Bataraza in southern Palawan. The islet is a migratory and wintering ground for shorebirds and seabirds.

This 1,983-hectare (4,900-acre) protected area located in the municipality of Narra is a nesting ground of the endemic Philippine cockatoo or katala. It also harbors other rare bird species and marine turtles.

All content from Kiddle encyclopedia articles (including the article images and facts) can be freely used under Attribution-ShareAlike license, unless stated otherwise. Cite this article:
Palawan Facts for Kids. Kiddle Encyclopedia.