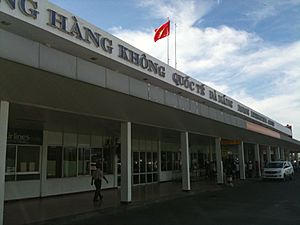 Da Nang International Airport is an airport in Da Nang, Central Vietnam. It is the third biggest airport in Vietnam. The French government built the airport in 1930s. During the Vietnam War, the airport was upgraded. It has two terminals (old and new ones) and two runways. There are international air routes to some Asian countries like China, Thailand, Singapore, Malaysia, Taiwan and South Korea.

All content from Kiddle encyclopedia articles (including the article images and facts) can be freely used under Attribution-ShareAlike license, unless stated otherwise. Cite this article:
Da Nang International Airport Facts for Kids. Kiddle Encyclopedia.