Borough of Bedford facts for kids

The Borough of Bedford is a unitary authority area with borough status in the ceremonial county of Bedfordshire, England. Its council is based in Bedford, its namesake and principal settlement, which is the county town of Bedfordshire. The borough contains one large urban area, the 71st largest in the United Kingdom that comprises Bedford and the adjacent town of Kempston, surrounded by a rural area with many villages. 75% of the borough's population live in the Bedford Urban Area and the five large villages which surround it, which makes up slightly less than 6% of the total land area of the Borough.

The borough is also the location of the Wixams new town development, which received its first residents in 2009.

The District of Bedford was formed on 1 April 1974 as a merger of the existing borough of Bedford, along with Kempston urban district and Bedford Rural District. In 1975 the district was granted a royal charter granting borough status as North Bedfordshire. The borough was renamed as Borough of Bedford in 1992. Over half of the former municipal borough of Bedford is unparished. However, Brickhill is a parish, and Queens Park as well as Cauldwell & Kingsbrook elect their own urban community councils, which have similar functions to parish councils. The rest of the district including Kempston is parished.

The Department for Communities and Local Government have reorganised Bedfordshire's administrative structure as part of the 2009 structural changes to local government in England, meaning that Bedford Borough Council became a unitary authority in April 2009. This means Bedford Borough has assumed responsibility in areas such as education, social services and transport which were previously provided by Bedfordshire County Council.

The urban part of the borough consisting of most of the Bedford/Kempston Urban Area is divided into 13 wards, some of which are also civil parishes: 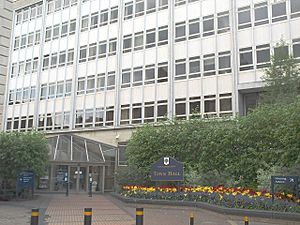 Town Hall, the former HQ of Bedford Borough Council. During 2014 the building was demolished to make way for a multimillion-pound public square development, which will link the River Great Ouse with St Paul’s Square. Once opened in 2015 this will include restaurants, cinema and a hotel. 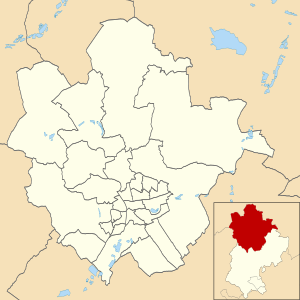 Map of the wards in Bedford Borough

The wards and constituent civil parishes in the rural part of the borough are as follows:

All content from Kiddle encyclopedia articles (including the article images and facts) can be freely used under Attribution-ShareAlike license, unless stated otherwise. Cite this article:
Borough of Bedford Facts for Kids. Kiddle Encyclopedia.