Etienne Stott MBE (born 30 June 1979) is an English slalom canoeist who started competing at the international level in 2002, initially in the K1 category, but switching to C2 in 2005. He retired from the sport in 2016. He is the Olympic Champion in the C2 event from the 2012 Summer Olympics in London. 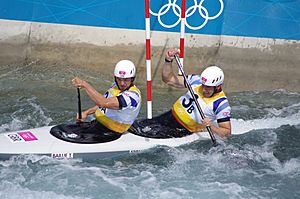 At the 2012 Summer Olympics, Stott and partner Tim Baillie qualified through the heats for the C2 event on 30 July, and subsequently progressed to the semi-final. The semi-final consisted of one run each, with the six best competitors qualifying for the final. Stott and Baillie finished in sixth place, taking the final spot and consequently qualifying for the final. As a result of their sixth-place finish, the slowest qualifying time out of the six remaining competitors, Stott and Baillie ran first in the final, securing a time of 106.41. The time was not beaten, with Stott and Baillie winning the gold medal in front of a 12,000 strong home crowd at the Lee Valley White Water Centre on 2 August. Fellow British boat of David Florence and Richard Hounslow finished second with a time of 106.77. Stott and Baillie's success was described as "unexpected" and a "surprise", with the pair describing winning gold as "mad".

Stott was appointed Member of the Order of the British Empire (MBE) in the 2013 New Year Honours for services to canoeing.

He has credited meditation/mindfulness as significantly helpful in his sporting achievement.

Born in Manchester, Stott grew up in Bedford, England, and attended Biddenham Upper School. He studied Mechanical Engineering at the University of Nottingham.

In April 2019, Stott was arrested during the climate change protests in London.. He said he did not regret being arrested.

All content from Kiddle encyclopedia articles (including the article images and facts) can be freely used under Attribution-ShareAlike license, unless stated otherwise. Cite this article:
Etienne Stott Facts for Kids. Kiddle Encyclopedia.