The Pilgrim's Progress facts for kids 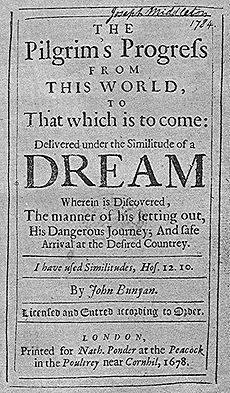 Title page of the first edition.

The book uses the dream story of a journey through the English county of Bedfordshire, to London. Bunyan uses this to tell the idea of Christianity from a Protestant point of view. Although the journey is imaginary, the places are based upon real places in 17th century Bedfordshire. The difficulties faced by Christian, the main character, is meant to be an allegory of the difficulties faced by a true Christian in keeping to the 'straight and narrow path'. The author was jailed for preaching his opinions, yet after the book was published, it was translated into over 200 languages.

Writing of the book

Bunyan started to write the book in jail. He got into trouble for preaching without a licence. Bunyan, who was a Reformed Baptist, did not qualify for a licence. Only ministers of the Church of England were allowed to preach. He spent 12 years in Bedford jail. He might have been freed if he had promised not to preach, but he refused. He was let out only when the law changed, in 1672. He was jailed again for a short time in 1677.

The book is divided into two parts, and is 108,260 words long. Each part is a continuous narrative, with no chapter divisions. When the first part was published in 1678, it immediately became extremely popular. Part Two was published in 1684. There were 11 editions of the first part during John Bunyan’s lifetime, and two editions of the second part.

The story is an allegory about a man called Christian, who goes on a journey, and meets many strange people. Christian is an 'everyman' character: he represents the reader or any ordinary person. Eventually he gets to the Celestial City. The strange people he meets are characters who represent good and bad things in life. The story is therefore an allegory of the life of a good Christian. To be precise, it is an allegory of the Protestant view of Christianity. It includes, as characters, the giants 'Pope' and 'Pagan', allegories of Roman Catholicism and paganism as persecutors of Protestant Christians. 'Pagan' is dead, indicating the end of pagan persecution, and 'Pope' is alive but decrepit (elderly), indicating the diminished power and influence of the Roman Catholic pope. The many indirect references to the Bible is a sure sign of Protestant belief. The Bible had not long been available in English, and its translation was opposed by the church in the reign of Henry VIII.

Many of the places Bunyan describes are based on places he knew in the Bedfordshire countryside. For example, the Slough of Despond is thought to be the marshes in Tempsford (now on the A1 road). House Beautiful is thought to be Houghton House (now a ruin), just outside Ampthill. The character of the Evangelist is that of his friend John Gifford, who was the leader of a non-conformist group at St John’s Church, Bedford. The heavy burden (the load), which Christian carries on his back, represents his sins: the things he has done wrong, and which trouble him. However, the burden is also based on the heavy anvil which he carried on his back as he walked from place to place. He worked as a tinker (someone who mends pots and pans).

Later, the Land of Beulah is Middlesex County, the Very Deep River is the Thames, and the Celestial City is London. 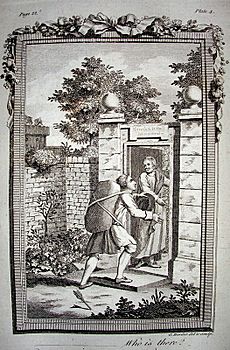 Christian enters the Wicket Gate, opened by Goodwill. Engraving from a 1778 edition printed in England. 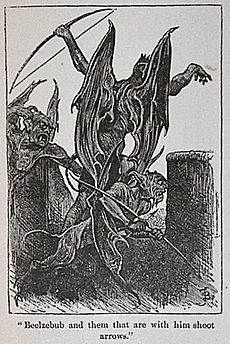 "Beelzebub and them that are with him shoot arrows"

Part One tells how a man called Christian makes his way from the 'City of Destruction' (Earth) to the 'Celestial City' (Heaven) of Zion. Christian finds himself weighed down by a great burden which he gets from reading a book (obviously the Bible). He wonders what he can do to be saved. The character Evangelist appears several times during the story, pointing him in the right direction. Evangelist shows Christian the way to the 'Wicket Gate'. Christian tries to persuade his family to join him on the journey, but they refuse, so he leaves them behind.

The first person he meets is called Mr. Worldly Wiseman, who says he can be saved by looking at the law, and that Mr. Legality can help him. Evangelist stops him from going that way. He must go to the Wicket Gate.

At the Wicket Gate the gatekeeper, Goodwill, tells him to keep to the straight path. In the Second Part, Goodwill is shown to be Jesus himself. To Christian's query about relief from his burden, Goodwill directs him forward to the 'place of deliverance'.

Christian goes to the House of the Interpreter, where he is shown pictures and that show ideas of the Christian faith. Then he gets to the 'place of deliverance'. This is meant to be the hill with the cross where Jesus died. There his burden falls off his back, so he is very relieved. Three shining ones give him the greeting of peace. They give him new clothes and a passport to the Celestial City (heaven). This is like a Christian Baptism.

At the top of the Hill of Difficulty, Christian stops at the House Beautiful, which is an allegory of the local Christian congregation. Christian spends three days here. When he leaves he is wearing armour which protects him when he fights a battle with the monster Apollyon. Then he goes to the Shadow of Death. He is not afraid because his friend Faithful reminds him of the words of Psalm 23: Yea, though I walk through the valley of the shadow of death, I will fear no evil: for thou art with me; thy rod and thy staff they comfort me. The sun rises as he leaves.

Just outside the Valley of the Shadow of Death he meets Faithful, who also used to live in the City of Destruction. They go together to Vanity Fair, where they are both arrested because they do not like the kind of business which is being done at the fair, all based on greed. Faithful is put on trial, and executed. Hopeful, who lives in Vanity, takes Faithful's place as Christian's companion for the rest of the way.

Together Christian and Hope have several adventures. They are captured by Giant Despair, who takes them to Doubting Castle, where they are imprisoned, beaten and starved. The giant wants them to commit suicide, but they refuse. Suddenly Christian realizes that a key he has, called Promise, will open all the doors and gates of Doubting Castle. Using the key, they escape.

They come to the Delectable Mountains where the shepherds show them some of the wonders of the place also known as 'Immanuel's Land'.

On the way, Christian and Hopeful meet a man called Ignorance. He thinks he can enter the Celestial City even though he does not believe. A ferryman called Vain Hope ferries Ignorance across the River of Death, but Ignorance is turned away from the gates of Celestial City and thrown into hell.

The Second Part of The Pilgrim's Progress presents the pilgrimage of Christian's wife, Christiana; their sons and the maiden, Mercy. They visit the same places that Christian visited, but they take a longer time. This is because the story includes the marriage of his sons, and children for the four sons and their wives.

The story shows that women can be as brave as men. They visit the same stopping places that Christian did, but they take longer because they marry and give birth to children on the way. The hero of the story is Greatheart, the servant of the Interpreter, who is a pilgrim's guide to the Celestial City. He kills four giants, including Giant Despair, and helps to kill a monster that terrorizes the city of Vanity.

Expert critics think the second part is important, and brings in more ideas:

"Part II, which appeared in 1684, is much more than a mere sequel to or repetition of the earlier volume. It clarifies and reinforces and justifies the story of Part I. The beam of Bunyan's spotlight is broadened to include Christian's family and other men, women, and children; the incidents and accidents of everyday life are more numerous, the joys of the pilgrimage tend to outweigh the hardships; and to the faith and hope of Part I is added in abundant measure that greatest of virtues, charity. The two parts of The Pilgrim's Progress in reality constitute a whole, and the whole is, without doubt, the most influential religious book ever written in the English language.

Part II shows human frailty: of women, children, and people with weak bodies or minds. When Christiana's party leaves Gaius's Inn, Mr. Feeble-mind lingers in order to be left behind. He is encouraged to come with the party by Greatheart:

But brother ... I have it in commission, to comfort the feeble-minded, and to support the weak. You must needs go along with us; we will wait for you, we will lend you our help, we will deny ourselves of some things, both opinionative and practical, for your sake; we will not enter into doubtful disputations before you, we will be made all things to you, rather than you shall be left behind.

All content from Kiddle encyclopedia articles (including the article images and facts) can be freely used under Attribution-ShareAlike license, unless stated otherwise. Cite this article:
The Pilgrim's Progress Facts for Kids. Kiddle Encyclopedia.