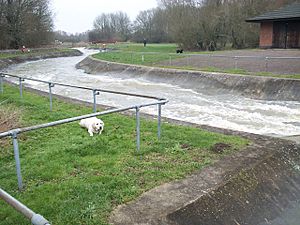 Being used as flood overflow.

Cardington Artificial Slalom Course (CASC) was the first artificial whitewater canoe slalom course in the UK when it was completed in July 1982, having been first discussed in 1972.

Based on the River Great Ouse adjacent to Cardington sluice, within the grounds of Priory Country Park and approximately 2.5 km downstream from Bedford, the course has a dual role as both a flood control structure and a whitewater course for canoe slalom training and events.

The course cost £273,000 and was funded by a consortium of the Ministry of Agriculture, Fisheries and Food (now the Environment Agency), Anglian Water, the Sports Council (now UK Sport) and local councils and was seen as an excellent example of the relatively low cost adaptation of a necessary structure to provide a facility of national significance.

The structure consists of an automatically controlled dropleaf control sluice, 9 metres wide, at the head of a concrete-lined channel which connects the upper reach of the river to the lower. The channel is 120 m long with a bed slope of 1:100. To create the required water flow pattern, fibreglass boulders known as "hippos" and "dollies" are secured to the base of the channel. The maximum head is 1.7 m with a maximum water capacity of 15 cubic metres per second.

Originally seen primarily as a training venue, the course also holds two national ranking canoe slalom competitions per year at up to Division 2 level, and is the host every year to the Inter Clubs Final, which pits teams from all the top canoe slalom clubs against each other for an overall trophy. Running all weekend with camping overnight, the Inter Clubs is the largest canoe slalom event in the UK (by number of participants), a great social event for the sport and one of the highlights of the UK slalom calendar.

The course celebrated its 25th anniversary in September 2007 with a visit by Frank Branston the Mayor of Bedford. The original project's vision of becoming 'a regional centre for canoeing' has come to fruition.

All content from Kiddle encyclopedia articles (including the article images and facts) can be freely used under Attribution-ShareAlike license, unless stated otherwise. Cite this article:
Cardington Artificial Slalom Course Facts for Kids. Kiddle Encyclopedia.