At the 2010 Pan Pacific Swimming Championships in Irvine, California, United States, Fratus made his first major involvement in an international tournament, finishing 4th in 50 metre freestyle, with a time of 21.93 seconds. He also finished 25th in the 100 metre freestyle.

In April 2012, disputing the Maria Lenk Trophy in Rio de Janeiro, Fratus earned the mark of 21.70 seconds in 50 metre freestyle.

At the 2012 Summer Olympics in London, Fratus reached the final of the 50 metre freestyle, earning 4th place with 21.61 seconds, just 0.02 seconds behind César Cielo, who won the bronze medal with 21.59 seconds.

In May 2013, Fratus underwent surgery to resolve an injury in his right shoulder, which had lasted two years.

At the 2014 Pan Pacific Swimming Championships in Gold Coast, Queensland, Australia, Fratus won a bronze medal in the Brazilian 4×100 metre freestyle relay, along with João de Lucca, Marcelo Chierighini and Nicolas Oliveira. The next day, he won the gold medal in the 50 metre freestyle, defeating Olympic champions Anthony Ervin and Nathan Adrian, breaking the Championship record, and beating his personal record with a time of 21.44.

In April 2015, he competed in the Brazilian Long Course Championship (Maria Lenk Trophy) for Esporte Clube Pinheiros. He had a time of 21.74 in the qualifying of the 50 metre freestyle, being by then the second best mark in the 2015 world ranking. He won the 50-metre freestyle final, beating César Cielo with the same time as the qualifying. 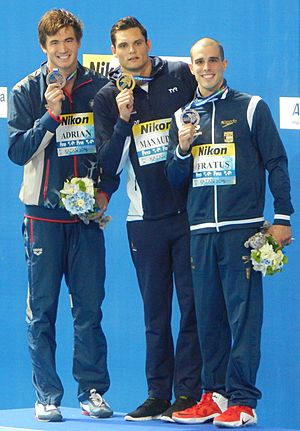 At the 2015 World Aquatics Championships in Kazan, Fratus earned his first medal in World Championships in the Men's 50 metre freestyle, where he won the bronze, with a time of 21.55. He also finished 4th in the Men's 4 × 100 metre freestyle relay, along with Marcelo Chierighini, Matheus Santana and João de Lucca. César Cielo did not swim the final – despite being participating in the championship, he was feeling shoulder pain on this day; and 6th in the 4 × 100 metre mixed freestyle relay, along with Matheus Santana, Larissa Oliveira and Daynara de Paula, breaking the South American record with a time of 3:25.58.

At the Open tournament held in Palhoça, Fratus broke his personal record in the 50-metre freestyle, with a time of 21.37.

At the 2016 Summer Olympics in Rio de Janeiro, Brazil, Fratus arrived as one of the favorites to win a medal in the Men's 50 metre freestyle. He qualified for the final, but here, only finished in 6th place with a time of 21.79. In an interview, he said: "For some reason, I'm not able to swim faster than that. I have no idea what is happening. This year has been very bad. I have to review the program". Before the Games, Fratus was suffering from chronic back pain, and the Brazilian Aquatic Sports Confederation (CBDA) even sent a physiotherapist to the United States, where Fratus lives and trains to accompany the athlete.

At the 2017 World Aquatics Championships in Budapest, in the Men's 4 × 100 metre freestyle relay, the Brazilian team composed by Fratus, César Cielo, Marcelo Chierighini and Gabriel Santos achieved a historic result by winning the silver medal, the best Brazilian result of all time at World Championships in this race. Brazil beat the South American record of 2009, still in the super-suits era, with a time of 3:10.34, just 0.28 from the US team. The last medal of Brazil in this race, in Worlds, had been obtained in 1994. In the Men's 50 metre freestyle, Fratus made the best time of his life in the race, 21.27, thus winning the silver medal. Fratus beat the best time of César Cielo in this race without the super-suits (21.32). He also helped Brazil's 4 × 100 metre medley relay to go to the final, swimming at heats. He registered his 59th and 60th sub-22 second long course 50-meter freestyles on 17 June 2018 at the Mare Nostrum Tour, passing country-mate and Olympic gold medalist Cesar Cielo as the most frequent 21-second sprinter in history.

In September 2018, Fratus underwent surgery to correct a partial rupture of the subscapularis tendon of the shoulder, missing out on important competitions.

Fratus only managed to re-train in good condition in February 2019. In April, managed to do the best time in the world in the 50m freestyle: 21.47. He won countless golds in the preparatory events in Europe, and reached the World Championship with the three best times in the world at the moment: 21.31 (Mare Nostrum Monaco), 21.42 (Sette Colli) and 21.47.

At the 2019 World Aquatics Championships in Gwangju, South Korea, Fratus won the silver medal in the Men's 50 metre freestyle for the second time in a row, with a time of 21.45, losing only to Caeleb Dressel. In the Men's 4 × 100 metre freestyle relay, he finished 6th, helping Brazil qualify for the Tokyo 2020 Olympics.

At the 2020 Summer Olympics in Tokyo, Japan, Fratus qualified for his third Olympic final in the men's 50 metre freestyle with a time of 21.60 in the semifinals on 31 July 2021. This semifinal swim of 21.60 marked his 90th time swimming the 50 metre freestyle in less than 22 seconds, making him the first swimmer in history to do so.

In the final on 1 August, he won the bronze medal, with a time of 21.57, at the age of 32. It was the 4th Brazilian medal in the history of the 50m freestyle at the Olympics. Fratus became the oldest pool swimmer in history to win their first Olympic medal.

In 2014, Fratus married Michelle Lenhardt, who is also an Olympian swimmer and now serves as one of his coaches.

Shortly after winning the bronze in Tokyo, Fratus' celebration went viral. It was nearly identical to the "Bronze Medal" meme that first emerged in 2020, with the coincidences catching the eye of many on social media. It is not known if Fratus was initially aware of the meme, telling Portugal's SPORT TV that his emotions were honest and he did not fake anything.

All content from Kiddle encyclopedia articles (including the article images and facts) can be freely used under Attribution-ShareAlike license, unless stated otherwise. Cite this article:
Bruno Fratus Facts for Kids. Kiddle Encyclopedia.