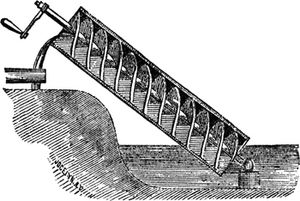 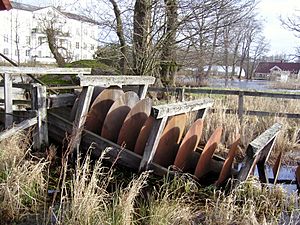 An Archimedes screw in Huseby south of Växjö Sweden

Archimedes' screw was operated by hand and could raise water efficiently

Archimedes' screw is a machine. It is a type of pump used for raising water up. It is a screw inside a fairly tight-fitting cylinder. With the bottom end in water, the screw lifts water up to the top, where it pours out of a spout. The screw can be turned by hand, or by a windmill, or by an engine. The screw is often used for filling irrigation ditches.

Archimedes wrote about it when he was in Alexandria, Egypt. It is not known for certain whether he did invent it, but it is always attributed to him. The Archimedes screw is still much in use all over the world.

There is also a kind of reverse Archimedes' screw. Water poured in on top turns the screw. The turning drives an electric generator, which makes electricity. It is good for rivers with modest water drops ('low heads'). The reverse screw has the same benefits as using the screw for pumping: it can handle very dirty water and widely varying rates of flow, with high efficiency. 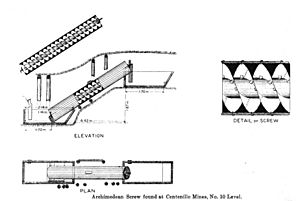 The screw pump is the oldest positive displacement pump. The first records of a water screw, or screw pump, date back to Hellenistic Egypt before the 3rd century BC. The Egyptian screw, used to lift water from the Nile, was composed of tubes wound round a cylinder; as the entire unit rotates, water is lifted within the spiral tube to the higher elevation. A later screw pump design from Egypt had a spiral groove cut on the outside of a solid wooden cylinder and then the cylinder was covered by boards or sheets of metal closely covering the surfaces between the grooves.

Some researchers think this device was used to irrigate the Hanging Gardens of Babylon, one of the Seven Wonders of the Ancient World.

The screw pump was later introduced from Egypt to Greece. It was described by Archimedes, on the occasion of his visit to Egypt, circa 234 BC.

Archimedes never claimed credit for its invention, but it was attributed to him 200 years later by Diodorus, who believed that Archimedes invented the screw pump in Egypt.

Depictions of Greek and Roman water screws show them being powered by a human treading on the outer casing to turn the entire apparatus as one piece, which would require that the casing be rigidly attached to the screw.

German engineer Konrad Kyeser equipped the Archimedes screw with a crank mechanism in his Bellifortis (1405). This mechanism quickly replaced the ancient practice of working the pipe by treading.

The Archimedes screw consists of a screw (a helical surface surrounding a central cylindrical shaft) inside a hollow pipe. The screw is usually turned by windmill, manual labor, cattle, or by modern means, such as a motor. As the shaft turns, the bottom end scoops up a volume of water. This water is then pushed up the tube by the rotating helicoid until it pours out from the top of the tube. 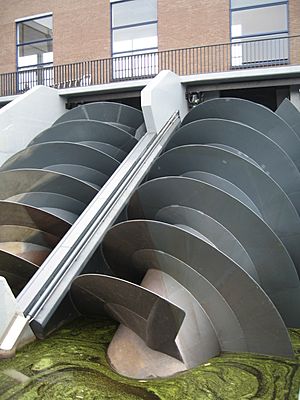 The screw was used predominately for the transport of water to irrigation systems and for dewatering mines or other low-lying areas. It was used for draining land that was underneath the sea in the Netherlands and other places in the creation of polders.

The principle is also found in pescalators, which are Archimedes screws designed to lift fish safely from ponds and transport them to another location. This technology is used primarily at fish hatcheries, where it is desirable to minimize the physical handling of fish.

An Archimedes screw was used in the successful 2001 stabilization of the Leaning Tower of Pisa. Small amounts of subsoil saturated by groundwater removed from far below the north side of the tower, and the weight of the tower itself corrected the lean. Archimedes screws are also used in chocolate fountains.

All content from Kiddle encyclopedia articles (including the article images and facts) can be freely used under Attribution-ShareAlike license, unless stated otherwise. Cite this article:
Archimedes' screw Facts for Kids. Kiddle Encyclopedia.