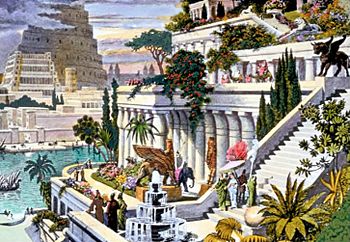 This hand-coloured engraving, probably made in the 19th century after the first excavations in the Assyrian capitals, depicts the fabled Hanging Gardens, with the Tower of Babel in the background. 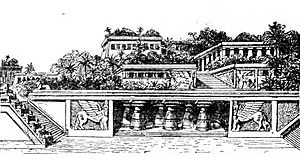 The Hanging Gardens of Babylon, and the walls of Babylon (near present-day Al Hillah in Iraq) were one of the Seven Wonders of the World. They were built by Nebuchadnezzar II around 600 BC. He is said to have built the gardens to please his wife, Amytis of Media. She wanted to see the trees and plants of her homeland. The hanging gardens were destroyed in an earthquake after the 1st century BC.

All content from Kiddle encyclopedia articles (including the article images and facts) can be freely used under Attribution-ShareAlike license, unless stated otherwise. Cite this article:
Hanging Gardens of Babylon Facts for Kids. Kiddle Encyclopedia.