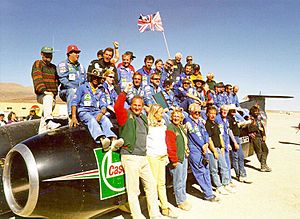 The team that built ThrustSSC.

ThrustSSC, Thrust SSC, or Thrust supersonic car, is a car powered by a jet engine. It was made by Richard Noble, Glynne Bowsher, Ron Ayers and Jeremy Bliss of the United Kingdom.

Thrust SSC is the fastest land vehicle. When tested on 15 October 1997, the car traveled at 1227 kilometres per hour.

All content from Kiddle encyclopedia articles (including the article images and facts) can be freely used under Attribution-ShareAlike license, unless stated otherwise. Cite this article:
ThrustSSC Facts for Kids. Kiddle Encyclopedia.