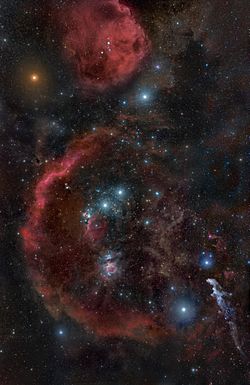 Part of the Orion complex. It shows the Orion nebula near the centre, with the Belt of Orion, and Barnard's Loop curling around the image

The Orion complex (sometimes called the Orion molecular cloud complex) is a huge star-forming area in the constellation of Orion.

It is a large group of bright nebulae, dark clouds, and young star clusters. The cloud is between 1,500 and 1,600 light-years away and is hundreds of light-years across. Several parts of the nebula can be seen through binoculars and small telescopes. Some parts (such as the Orion nebula) are visible to the naked eye.

The nebula is important because of its sheer size. It is also one of the most active regions of stellar formation that can be seen in the night sky. In it are protoplanetary discs and many very young stars. The nebula is very bright in the infrared wavelengths due to the heat-intensive processes involved in star formation. The complex contains dark nebulae, emission nebulae, reflection nebulae, and HII regions.

Nebulae in the complex 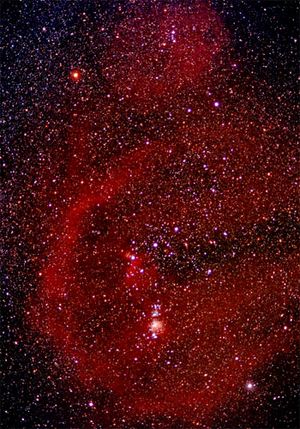 A picture of Barnard's Loop, a main part of the nebula complex. Also seen in the image are other nebulae, such as M42

The following is a list of notable nebulae in the larger nebula complex:

Also the Orion OB1 Association is part of this complex. This is a group of several dozen hot giant stars of spectral types O and B.

All content from Kiddle encyclopedia articles (including the article images and facts) can be freely used under Attribution-ShareAlike license, unless stated otherwise. Cite this article:
Orion complex Facts for Kids. Kiddle Encyclopedia.